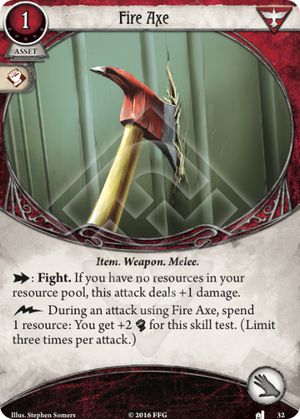 I personally think this is one of the most thematically satisfying and versatile weapons in the current card pool.

The paying 1 to boost 2 is an incredibly good rate of return compared to the likes of Hard Knocks or Physical Training (the only other pay to boost options in the game just now). In low characters such as Wendy it makes occasional combat quite viable even if you dont want to go all in for the + damage. A maximum of +6 should be enough to land a blow of some sorts on most enemies irrespective of which investigator your playing. In a combat focused character it may enable harder difficulties, or devastating late game combos with Double or Nothing and Vicious Blow. Note that Zoey's passive bonus resource upon engagement can be spent immediately on the axe if needed. She can also choose not to take it if you dont want to go above 3 resources to keep that + damage option open.

By combining a damage card and pay to boost ability, Fire Axe sets up much quicker and much cheaper than decks aiming to use Hard Knocks or Physical Training with a weapon (likely Machete) to maintain both high and bonus damage. The tempo boost from this is not to be understated here. In the case of Machete and Hard Knocks, you need to find 2 cards, pay 2 actions and 5 resources compared to 1 card, 1 resource and 1 action with the axe

To compensate for these fairly hefty advantages, Fire Axe requires a little working around if you want to reliably be able to use that +damage abiliy. Firstly it is important to be aware of your cash flow. Be careful not to play your Emergency Cache or similar until you actually need to spend it. in cheap enough decks you might not even need to bring a cashe at all.

Second or subsequent swings with bonuses to both accuracy and damage can be obtained through committing cards for icons on your second attack, in particular Overpower, Unexpected Courage, or the in faction Oops!. Alternatively, as pilgrim highlights, Forbidden Knowledge lets you take another resource between swings giving you a second attack at +2 and +1 damage.

Natural comparisons are with Machete and Baseball Bat. Others are of course available, but im conscious of how long this review has already become.

Machete is arguably the closest comparison for a weapon you could potentially plan to reuse indefinitely. The consistent + 1 damage is only dependent on the enemy being engaged with you and being the only enemy engaged with you (not hard to achieve by any standard) and it attackes with a passive +1. This may not be enough alone in low characters, but it probably is in combat heavy characters at least for regular encounter deck opponents. In exchange it is more expensive, a different faction and arguably needs support cards to hit boss type enemies (rather than resources as the axe does). That said, by the time a boss has materialised you would expect to have seen your combo pieces.

Baseball Bat offers a consistent + damage, and effectively saves you 1 resource per attack where you needed to boost, but will eventually break and similar to Machete needs support to go higher on bonuses should the need arise. Arguably its biggest achilles heel though is the two hand slots requirement, which can be very restrictive in non-arcane focused investigators, particularly by hampering the option to use key investigation cards like Magnifying Glass or Flashlight. Or indeed carrying a back up weapon.

Comparisons aside it is worth remembering that if you do plan on using weapons, you may well want 4 or 5 cards in the deck to be likely to draw one early. Certainly 2x Machete and 2x Fire Axe together isnt a bad call for a melee build. Late game you will probably have the one you need for your boss fights and early game frankly they are similar enough to be substitutes while you get rolling.

StartWithTheName · 54924
Its worth noting that Fire axe does work on non-fighter's. Say for example a Wendy or Rex that is supposed to be chasing the clues. If the game throws a wrench in your plans and puts an easy foe in your way you can deal with it with the Axe and continue. Sometiems you just gotta unlock a location and repeatedly evading a 1 or 2 HP foe might not be an option. — Tsuruki23 · 2350 1/20/18
I find it very curious that this doesn't require two-hand slots. The flavor-mechanic relationship is on point except for that one detail. Have you ever seen or heard of someone using a Fire Axe one-handed? No, to really be effective, you have to use two-hands, which make me wonder what the designer(s') rationale was... — ArkhamArkhanist · 9 9/1/18
7

Four deluxe cycles later, Fire Axe remains one of the best level 0 weapons in the game, though its role is incredibly different from something like a .45 Thompson or a Shrivelling. The point about this card's accuracy has only gotten more true over time: with the exception of a three+ action'd Chicago Typewriter, there is no other weapon in the game that inherently lets you boost your by 6, not even upgraded weapons. Reading the card, your instinct might be that the two abilities are at odds with one another. Do I keep lots of resources to hit with accuracy for 1 damage, or do I keep resources low so that I only fight at a modest boost but for 2 damage? Moreover, is it worth it to continually spend resources into a weapon instead of spending them elsewhere? How easily can I manage having 0 resources?

Let's first talk about the economy in place for this card. Ideally you want to run this in a deck that isn't very resource hungry. Your other cards should be mostly 0, 1, or 2 resources in cost. This way you can dedicate more of your pool to fighting. There are now a few cards that can be used to recoup resources quickly but consistently:

Using these cards, it is perfectly viable to have 2 or 3 spare resources each turn to throw into a Fire Axe test, or instead to recoup the resources from last turn's Fire Axe test to spend on something else. The idea here is that you can maintain the use of this card without sacrificing tempo on anything else you need to be doing.

Someone wielding the Fire Axe probably isn't a dedicated fighter, as sinking and recouping resources to sink into it again is not a very consistently possible thing to do in one turn. Rather, the Fire Axe's biggest strength is it lets people who otherwise cannot fight at all help clear the board or defend themselves. If your Mark Harrigan has to dart all the away across the map to save you just so you can Intel Report safely, you're wasting actions. If your Zoey Samaras has to clear a Wizard of the Order you drew to keep the agenda from advancing next turn for you, you might lose rounds. And if you're playing solo, you're gonna need to fight on your own. How do you manage that as Wendy Adams? Fire Axe is the answer to all of those problems.

This is a card that works best in investigators who A: Would not have a good time taking any other weapon and B. Have the economic infrastructure to use it consistently. This means you want it with investigators with either low or limited weapon access. Here are some investigators who love to hack Eldritch horrors to pieces:

Finally, I'd be remiss if I didn't mention Dark Horse. This is a card whose most consistent application is to turn your +6 tests on Fire Axe into +7 . Whether that's worth the tempo loss of 3 resources, a card, and an action depends heavily on the chaos bag (and therefore the difficulty as well as the campaign), the investigator you chose, and whether or not you can follow up a Fire Axe attack with a test in some other stat. For example, a Preston Fairmont deck might use skill pumps like Dig Deep to get most of its work done, in which case Dark Horse can be used to great effect on or tests (admittedly tends to be more narrow in its application mid round, but there are treacheries where this is relevant). Alternatively, Preston might choose instead to buy most of his evades and clues, via Lola Santiago, Intel Report, and Decoy. In this sort of deck, Dark Horse loses value. So think critically about how much you need that +1 boost, how often you can get it, and whether or not the other boosts are worthwhile. We often call resource low decks "Dark Horse" decks, but in reality Dark Horse has become less and less valuable of a card among them. Fire Axe, meanwhile, has only gotten better.

Fire Axe is the weapon of choice for non-fighters. It keeps your weakest investigators alive and saves them time to do the things they're naturally good at doing. It's for that reason that it's managed to become my personal favorite weapon in the game. It's not always easy to use, but it's well worth it.

StyxTBeuford · 12744
I’m honestly a little shocked it’s stayed off the taboo list since it’s pretty easy to turn this into a weapon whos consistency exceeds that of machete. — Difrakt · 1180 10/15/19
It's an excellent card, but Preston aside (because of that interaction with Family Inheritance), it requires a lot of investment and building around to be effective. I don't think it's taboo-worthy. — CaiusDrewart · 2816 10/16/19
Also because machete exists in a class with lots of other level0 weapon options, while fire axe doesn’t. I imagine we might see it taboo’d in an expansion o after another option appears. — Death by Chocolate · 1258 10/16/19
*if it is still dominating the meta by then. — Death by Chocolate · 1258 10/16/19
2

This card is curious to me. It seems to fit a similar slot as Physical Training or the other talent cards. By itself it does nothing but spending a box gives a bonus to a skill for a resource. The down side is it uses a 'hand' slot and only applies to combat. Spending all your resources for a plus one combat bonus is nice but risky.

Machete is obviously the best hand to hand combat weapon. But let's compare Fire Axe to others readily available to survivors (as of Dunwich).

Baseball Bat the other survivor card is powerful, cheap and gives a massive plus 2. Unfortunately it is subject to breakage with and uses 2 hands.

At the same cost Knife gives a simple plus 1 or can be thrown for plus 2 fist and damage! Cheap and easy for a disposal weapon which along with baseball bat synergies with Scavenging.

All the weapons have a downside however Baseball bat is obviously superior. If you have that hand planned for something else, say Agnes Baker with Ritual Candles it isn't a bad call. However i would possibly be more keen on knife with scavenging or kukri as Fire Axe does nothing on it own.

Pilgrim · 293
It's worth noting Agnes with Forbidden knowledge is in the best place to use Fire Axe. Spend all your resources, use forbidden knowledge using Agnes passive ability and attacking again. That's a potential 5 damage in two actions. — Pilgrim · 293 2/12/17
Am I right in thinking that if you take the action to initiate fight then spend say the ONLY 2 resources you have for +4 fight you would then also trigger +1 damage as at the point damage is calculated you have no resources? — Stebb · 2 3/18/18
Yeah @Stebb, that would deal 2 damage. If you attacked with no resources in the first place, it would also deal 2; the damage increase is contingent upon you not having resources, not you spending them. — SGPrometheus · 688 5/14/18