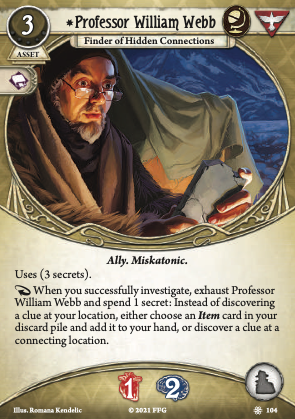 In addition to @olahren review: William has a nice interaction with Mariner's Compass, Fingerprint Kit, Archaic Glyphs and other multi-clue cards. If you find yourself investigating a location with one clue, you can now grab that second one from somewhere else. 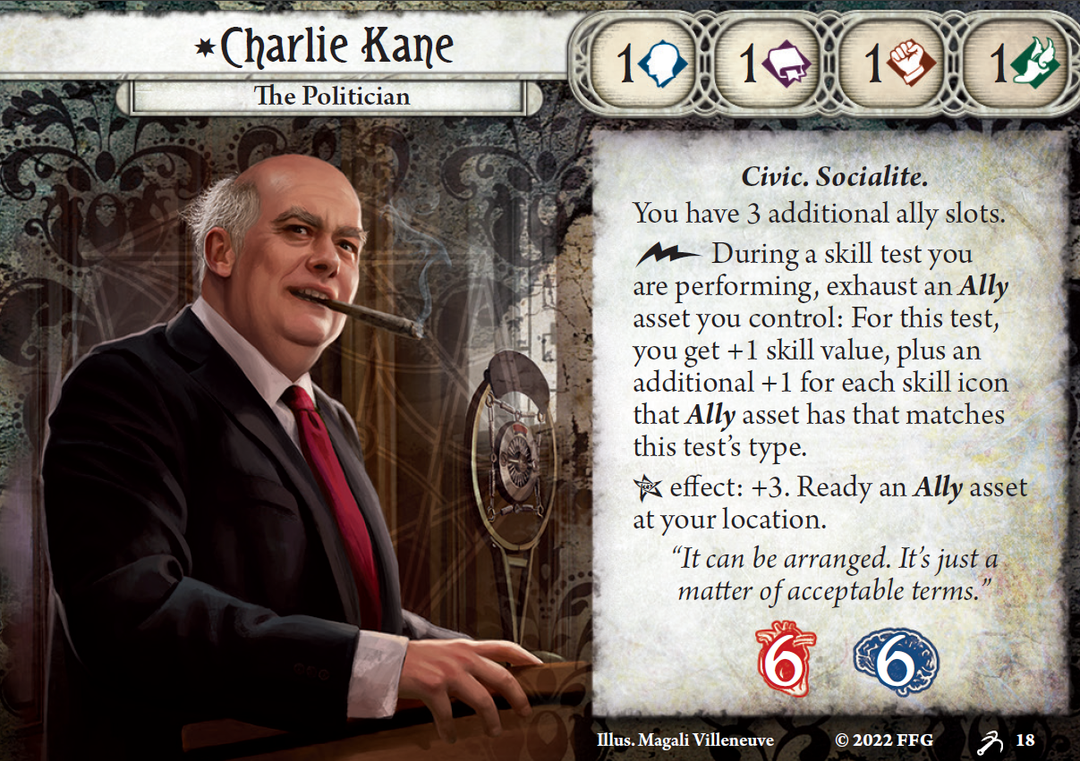 Charlie is a disabled old man with a cane and a bad smoking habit, until you play him off taboo.

Off taboo, he's a machete wielding lunatic who swarms his victims with a pro football player, dogs, a literal assassin and his trusty secretary. He uses Dig Deep and Drawing Thin to ace will/evasion checks, physical conditioning or combat training to buff his machete and loves explosives. He's even ever vigilant for eldritch horrors, and has no problem going Toe to Toe.

Don't count this guy out, unless you play taboo. I'm not sure how to play him without the ridiculous resource generation from Drawing Thin.

This mitigates his biggest problem which is playing assets, and let's you do one (1) really good combat check per round. He's otherwise extremely tanky, but due to the fact he only gets one "good hit" hes dependent upon card effects that guarantee damage.

That's not enough to be a solo mob healer imo, and he will usually need to be paired with someone who can handle enemies just fine on their own (i.e. trish) but his strength comes from being able to do anything really, really well, one time per round.

I got to try Embezzled Treasure recently in a big-money Jenny Barnes deck, and this was an all-star. I don't think every rogue will want it, but for those who do it is for all intents and purposes a 0xp Another Day, Another Dollar that costs an action but will frequently net you more resources that you can share with your friends.

Specifically, those who want it are any rogue with more money than they can use in the lategame. Big money builds are the obvious choices here, but rogues that use money making engines like Lone Wolf, or have their resource expenditures frontloaded into assets and setup turns can also use it.

In particular, decks using Underworld Market or any other illicit synergies will find this useful. The market keeps Embezzled Treasure from clogging your hand and draws, while reliably giving you access to it early enough to start loading it up with resources. And if you're running Fence or "I'll take that!", you can get this in play without even spending the one action!

While I think this card is very strong, there are a few caveats I would be remiss not to mention. First, this is a campaign-only card, utterly useless for one shots. Second, there is an awkward timing issue with this card. The action cost to play it (sans Fence) is not negligible, and you need to play it at least 5 turns before the scenario ends to get full value. Finally, while I think a committed Big Money deck could support both copies of this card, this feels to me like a perfect one-of.

All that being said, the next time you're rolling in money, save some away for a rainy day. You and your friends will be happy you did. 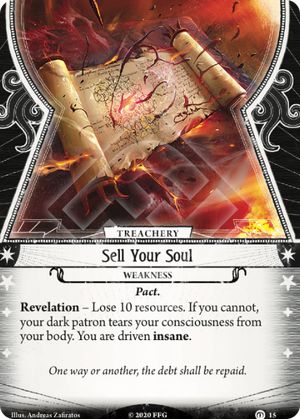 Obviously no one wants to be driven insane, but I think Dexter Drake can make use of this card. With Deny Existence (5) this card effectively reads "Gain 10 Resources.", so if you run 2x Deny Existence (5), Word of Command, and Faustian Bargain, you have decent odds of either easily mitigating this weakness or actively profiting from it.

The drawback is that there is significant setup with this combo. You need to randomly draw Offer You Cannot Refuse while at 4 resources or less, then in a later scenario you need to draw Fine Print with fewer than 7. I recommend running cards like Armageddon over Shrivelling to keep your resource count down.

If you can find some way to keep your resource count low early on it's easy enough to set this combo up within the first 3-4 scenarios of a campaign.

Having played with the Runic Axe now I must say do not underestimate the Inscription of the Hunt. I bought it just because my initial plan of Glory, Elders, Ancient Power and Scriptweaver totalled to 9 and I didn't think I'd need the Heirloom discount but it massively overperformed. Free engages on Aloof enemies is obviously nice and getting to move into a location of enemies and still getting to make 3 attacks was great but what surprised me was how often I just wanted to move whilst engaged with an enemy, Walking the enemy to locations with clues on them let the Inscription of Elders proc more often and just let me continue moving towards the current objective whilst enemies tried to bog us down.

Convery · 4
I had a similar experience, adding Hunt caused the value to skyrocket. You can squeeze so many bonus actions while still reliably dealing damage. — Pseudo Nymh · 2 11/28/22