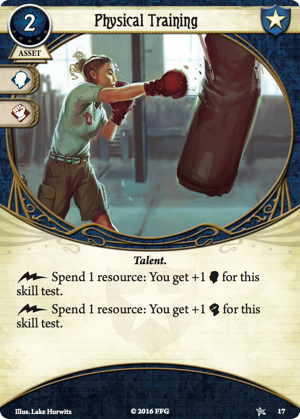 Physical Training, Hyperawareness, Hard Knocks, Arcane Studies, Dig Deep - they all have something in common: all these cards give you temporary boosts to individual skill tests at the cost of resources.

The inclusion of these cards is closely related to your investigator's economy! With the new card, Dark Horse, you may plan to stay poor as a church mouse and this asset can help you with that. Or, on the contrary, if you are living the dream, and some investigators proverbial float in resources, you can afford to bundle Hard Knocks+Arcane Studies or Physical Training+Hyperawareness to boost all your skills! In short, keep your hands off if you don't have action-free income!

If you are interested in the discussion, i would recommend this thread to you. If "Skids" O'Toole is going to play one of the beforementioned talents, he is going to play Physical Training. With base 4 and a deck packed with icons, he does not really need to buff his agility, wheras his base willpower of 2 (and a deck mostly bereft of icons) does need some help. Physical Training is said to work well with Zoey Samaras, too, while Roland Banks struggles for the money to use it effectively.

This is still seen a lot in beginner decks, so I thought I'll write an updated review (and because the existing pros and cons review is kind of misleading).

You should almost never take Physical Training (0). Not even as deck slot filler, unless you have nothing but the core set (in which case you might not have any other deck slot fillers).

This card (and this class of cards in general) is among the most inefficient cards in the game. By standard action-economy analysis, this costs 4 "actions" to play: 2 resource, a card, and a play action. That's a large investment for a card that you need to burn even more resources on to get any benefit out of. If you don't use it a lot, you just spent 4 "actions" for very little benefit. If you use it a lot, you'll find yourself short of resources to play actually useful allies weapons and events.

By the time you gained a +3 boost from Physical Training, you have just paid for a Leo De Luca in a class that isn't especially known for being flush for resources, and have gotten far less benefit.

If your 0xp deck is flush enough in resources to take Physical Training, it is a sign that you've over-invested in resources for your deck, or should take the chance to throw some Dynamites.

The upgrades don't have this problem because they have a much lower upfront cost (and synergy with Well Prepared).

suika · 8826
A one of card that can spend resources is more useful than it sounds, it is very easy to have one or two games with a deck where you simply can't turn your resources into progress, no matter what the situation is physical training will give you that progress, sometimes dynamite is in hand when you need soak, or an ally is in hand when you need to avoid AoO. and almost all assets have a cost of 3+ "actions" and there is certainly worse than a slotless comitable card. — Zerogrim · 262 2/26/21
This is great for P skids with O Back. He has too many resources. This pushes his fight and saves him from treacheries like rotting remains or frozen in fear. — Django · 4408 2/26/21
@Zerogrim difference being that nearly all other assets provide some form of benefit without needing you to spend even more resources — or if they do need you to spend resources/cards, they have much higher rates of return on those resources. And physical training won't help you if you need soak or need to avoid an AoO either, so I don't quite get your point (also nearly every card is committable so). Physical Training also practically never translates into progress by itself unless there's a Will parley somewhere, in which case you should have bought Fine Clothes instead. — suika · 8826 2/26/21
@Django 1) skids fighting with Fist isn't very effective in the first place 2) skids has much better resource sinks and/or well-connected 3) skids can soak the horror from rotting remains, and after a bit of XP he has much better options against Frozen in Fear and will treacheries — suika · 8826 2/26/21
suika I definitely agree that this suite of level 0 cards are simply not worth taking, except for one exception: a beginner Preston deck. He's simply got the cash to make those costs irrelevant but may need help with a head test every once in a while. That being said, even this advantage I've found to be niche as I usually am spending my 5 resources a turn on something else, and thus willing to take whatever the encounter deck wants to give me. But there are a few of those truly nasty cards (frozen in fear) that you just have to pass, and Preston doesnt have a plethora of cards with head icons to rely on. I haven't played with the super upgraded version yet, but I imagine it's simply cream these situations. — jdk5143 · 96 2/26/21
@jdk5143 Dig Deep is a great Preston card yeah. The analysis is different for Dig Deep and Scrapper as well since those are in the class with Dark Horse access. — suika · 8826 2/26/21
The problem with the "there are other cards that offer boosts" is that those cards often compete for slots. So a "slotless boost card" can provide more flexibility. — LivefromBenefitSt · 937 2/26/21
@Live the more relevant comparison would be using skill cards for boosting, since PT boosts are per test only. Skill cards are pretty much better every time than playing and boosting via Physical Training — or even random cards with Will and Combat icons. — suika · 8826 2/26/21
Well, except PT can be used repeatedly (depending on resources) which is like other assets but not like (most) skills. I think PT is particularly weak because of traditional Guardian resource economy problems. — LivefromBenefitSt · 937 2/26/21
Resource boosters are fine in decks that generate plenty of resources. Something like Dig Deep in Preston or PT in Jenny can do a lot of work. I think saying PT costs you 4 actions ignores that 1. You start the game with 5 resources and cards, and 2. That many classes have more efficient ways of gaining those things. A resource isn’t really worth one action unless you’re taking the resource action, which most people tend to avoid. — StyxTBeuford · 12744 3/17/21
@Styx: it's an analysis of opportunity cost, resources you're spending on PT could have been spent on other assets, instead of PT you could have drawn another asset. — suika · 8826 4/9/21
And this specifically applies to PT, not other boosters like the composures, or even Scrapper/Keen eye. PT is subpar even on Jenny. — suika · 8826 4/9/21
3

Physical Training, Hyperawareness, Hard Knocks, Arcane Studies, Dig Deep are part of a cycle, and partly share a common review. These cards are really, really inefficient, yet they have unique capabilities and I at least consider whether to take them every time I make a character. They have two main purposes:

If you do play one of these cards, when it is worth using? A really good situation is when +1 skill would turn 3 tokens (about 1/5 of the bag) from failure to success. So if turning a failure into a success isn’t worth 5 resources, you shouldn’t be using this.

Now for the review specific to Physical Training: In theory this could be the best card of the cycle, because combat and willpower checks can be the most vital, with the worst penalties for failure. But guardians tend to be cash strapped and unable to use this card even if they would like to. You might find it usable if you tend to complete your character and not need any more money after that (a machete fighter perhaps), or if you are someone like Skids who needs the help and has access to extra resources.

ChristopherA · 97
Even though I go back and forth on the talents myself, I do like the comfort element you bring up. For me I just hate having to pay 2 resources just to get the thing in play so the 2xp upgrade is generally what I use. Those are even great mock skills in case you never get the action to play them. — LaRoix · 1608 4/18/21