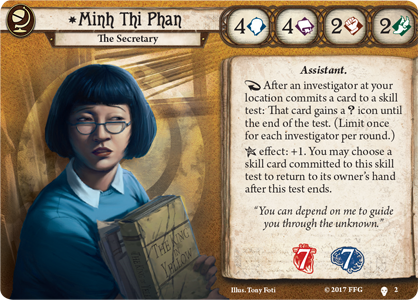 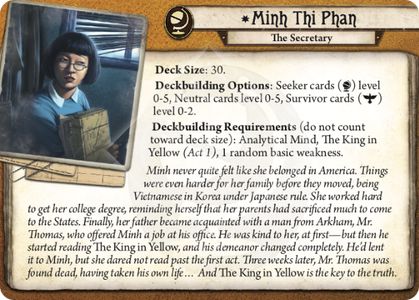 __Deck Building
Search for cards usable by this investigator
Reviews
39

Since the committed card gains after it's committed, this doesn't let you commit cards that don't a matching symbol or cards (like Emergency Cache) that don't have any skill symbols.

The effect only applied to skill cards, not any card you are using to support a skill check.

The best* seeker in the game, and the worst^ seeker in the game. Minh revolves completely around her access to her signature Analytical Mind, without it she struggles to pass tests without depleting resources and is forced to huddle around her allies to make use of her ability. Once Analytical Mind is in play, however, her potential is unshackled and she can project unparalleled support across the map while accomplishing her own clue-oriented objectives.

For this reason Minh is below power curve until she has two No Stone Unturned (5)s to guarantee immediate access to her unique asset. Past 10xp Minh begins to outpace her contemporaries, and past the midpoint of a campaign she should be trivializing (through some combination of hard card draw and Deciphered Reality) scenarios which severely hamper others.

Obviously she’s better in higher player counts, but she is more than effective enough in 2p. A late-campaign Minh can reach tiers of effectiveness even a pre-taboo Rex would flinch at.

Difrakt · 1166
I strongly disagree with the assessment of Minh as the worst below 10xp if the only grounds for that is lack of reliable access to Analytical Mind. Mr. Rook and other seeker card draw and dig can very reliably pull Analytical Mind even in a level 0 deck. Her own weakness isn't bad to pull early with Rook since (A) it avoids the surprise lost hand slot later and (B) can be easily dealt with by pulling more pitch icons that Rook himself is helping you grab (even at that very moment). — Death by Chocolate · 1229 10/25/19
Rook definitely improves the situation, but at significant risk of pulling either of your two weaknesses which can drastically slow down your deck (and every turn not doing what Minh does best is a huge loss). The resource cost alone is a big problem, and sometimes even with rook you won’t have the right collection of skill icons to clear her weakness early on. — Difrakt · 1166 10/26/19
Seeker grisly totem, drawing thinh, eureka, Ressourceful, perception all help to stay stocked with skill cards as well; Chance encounter 2 is great to resurrect rook and has Int icon to commit. Good target for resourceful — Django · 4292 10/27/19
& Compass. — MrGoldbee · 1299 7/31/21
6

It’s worth reconsidering Minh a few years after her debut. And it’s because nearly every beneficial card survivors have for clues is in the 0 to 2 XP range.

In terms of assets, the mariner's compass lets you run a speedy-efficient dark horse Minh. In duo, you can clear most locations in one action. With scavenging, you can recur the ice pick(3) and make it three clues. Or use scavenging(2) to continually grab your old keyring.

The new survivor skills are also amazing. In your hands, unexpected courage (2) is a ???. With analytical mind, you can use it all game to mitigate tests they won’t pass but are punished by how much they fail. You even get a card! Plus, you can recur it to help deal with your weakness.

Signum Cruces can fill the bag with blesses, even if you’re intending to use a fire axe and succeed. Unrelenting lets you take test without symbols that penalize you for trying.

On the seeker side and ignoring recursion, Ancestral knowledge and Guided by the Unseen get you more skills. And while Ancestral might make PMP harder to trigger, it allows you to get skills you need later, like stunning blow. Congratulations, the guardian just evaded the boss! No more retaliate this turn!

There’s a lot that makes you hardier than a normal seeker: bandages, jury-rig, hiding space… So many different ways to build the seek-tary. (Although most of them involve the card you can get from either color, grisly totem.) Plus, you can use it to help deal with your weakness.

Now go get a lot of clues and make your team more efficient!

MrGoldbee · 1299
Minh got a big boost wtih EOTE. Scavenging (2) eon chart gives her lots of actions. Pocket telescope saves her lots of actions to investigate from a central spot. Ancestral knowledge is very helpful for clearing the king in yellow. — Django · 4292 11/14/21
I think, Minh has a lot better items for her handslots than compass or even more so keyring. And upgraded "Unexpected Courage" I would strictly only consider, if she has people on the team, who plan to fail stuff. Sure, Scavenging (2) is great on her and "Ancestral Knowledge" as well. — Susumu · 234 11/14/21
0

The problem is her weakness.

Let's compare Minh to the first seeker in the game everyone has access to: Daisy.

Stats (Winner: Daisy) Daisy has a 5 int, whereas Minh has 4. Daisy has a lower Will, but a higher sanity and can safely fail will checks easier.

Survivability (Winner: Tie) Minh is more durable with 7 health, whereas Daisy is quite squishy with only 5. Minh has access to survivor cards like leather coat and Jessica Hyde, but Daisy has deny existence. Overall, they can both stay on the board pretty well.

Card pool (Winner: Tie) Some really good survivor cards came into play with TSK. However, they both aren't really going to want to delve too deep into their offclass as the seeker cards themselves are still pretty nuts.

Daisy and Minh both get assets that completely lock up a hand slot,and limit each character to one hand. Daisy's signature asset completely locks down her weakness though, and basically ends up netting her one hand at the cost of increasing the auto fails in the bag by 1. Minh's weakness on the other hand completely locks down Minh's signature asset to where she basically can't use it if King in Yellow is on the field. For Minh to clear the King, she's going to want to be draw heavy so she can over commit. Since she's draw heavy though, she's going to be drawing the King a lot too. If youre playing with more than one actove hand slot, you always have the threat of King bumping one of your slots. Compare that to a draw heavy Daisy. Once she has necronomicon safely tucked in her book bag, it's a non issue for the remainder of the game.

Minh can boost each investigator by one each time. They're probably not attempting checks they couldn't innately pass anyway, and this ends up essentially being pretty useless. Daisy on the other hand gets a free action on tome abilities, which she will most likely use on Old Book Of Lore. Draw (and even free asset play) each turn, pretty much every turn, guaranteed.

The librarian will outperform the secretary in almost every scenario. Since they're both competing for the same role... I find it hard to ever really recommend Minh. I have yet to find a deck build for her that Daisy can't do better, and as such she's a C Tier investigator for me.

drjones87 · 94
I am no stranger to hot takes, but saying Minh is bad is a bold statement considering some of her decks were so strong they were a large reason cards were taboo'd. — dezzmont · 149 11/25/22
Seeker 5/Survivor 2 is probably the strongest card pool in the game. Minh doesn't even need an ability or signature to be good. But she does have a great sig - much better than Daisy's, which just lets you maybe play a couple of tomes you might not even need if you're just using Old Book of Lore every turn. Her weakness turns off her ability and signature, but is much, much easier to clear than Daisy's, and doesn't double the amount of autofails in the bag if you leave it in play. — SSW · 186 11/25/22
Please, show me a deck that this holds true. I know about twenty different ways to build Daisy. Every Minh build comes back around to the same problem. Build her for draw to combat King In Yellow and you just draw it more. Don't, and it completely shuts down her sig. As stated above. — drjones87 · 94 11/25/22
Drawing the King in Yellow isn't a problem if you also draw enough cards to trivially commit +6, which Minh can easily do. If your drawing lots of cards you 'hit your weakness faster' but it also literally doesn't matter. This means that in normal play Minh doesn't need to do anything special besides maybe discard an extra card on a skill test, while Daisy (who I think is quite good but is a very different character) has to give up using her character power for 3 turns while taking sanity loss to clear her weakness. As SSW said, Seeker 5/Survivor 2 is a ridiculously good combo as well due to scavenging, which allows Minh to do bonkers things like infinitely recur limited use researched cards, or utilize her insane skill synergy with ice picks to become a better killer than many guardians. — dezzmont · 149 11/25/22
Does having to build (slightly) around your sig weakness make a character bad? Especially when the thing you're building around - drawing cards - is generally just a net benefit to begin with? Also, Minh is absolutely a thousand times more versatile than Daisy in her deckbuilding, it's not even close. You could build a Minh deck with all survivor cards. You can absolutely not build a Daisy deck with all mystic cards. — SSW · 186 11/25/22
I found the best solution to address the King in Yellow to be "Archaic Glyphs: Guiding Stones". Suddenly, committing 6+ icons to a single test isn't a waste any more, as it gives you loads of clues, at least in higher player counts. I played her before the release of "Ice Pick", and still found her a very strong investigator. — Susumu · 234 11/25/22
A Glimmer of Hope solves her weakness. — MrGoldbee · 1299 11/26/22
Sometimes you may feel threatened when you have to overcommit cards to clear KiY at the risk of drawing the autofail. But now...Analysis just makes that a non-issue. TSK actually made Minh even stronger. — toastsushi · 62 11/26/22
Dream Eaters gave Minh Dream Diary, A Glimmer of Hope, and Sharp Vision and I've never had trouble clearing King in Yellow since. Everyone's entitled to their opinion, but "still bad" is very different from my experience. — Pseudo Nymh · 2 11/28/22