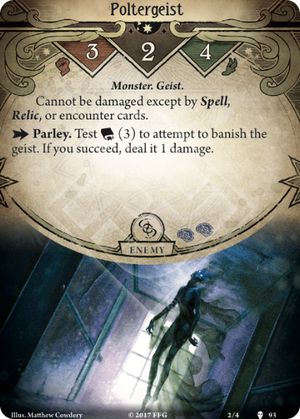 Who knew that Fine Clothes would make Exorcisms so much easier?

In the card pool up to and includng Path to Carcosa Deluxe expansion, we've seen only 4 player cards (not counting different XP versions of the same card) that can harm the Poltergeist:

So unless you're packing very specific Mystic cards, your only option is to exorcise these ghosts via Parleying. The good news is that a decent intellect - or, as above, some Fine Clothes - make this process not excessively onerous, although one you'll almost certainly have to do twice.

As they say, dress for the job you want. In this case, that job is apparently Father Merrin.

Given the age of the last review, I thought I'd update the list of Relics and Spells available to damage this. In broad categories and not counting upgrades, they would be:

0 XP, Damage on Any Success:

1+ XP, Damage on Other Effect:

To summarize, Mystics have plenty of options to deal with this, and Guardians aren't completely dead in the water at the start, thanks to Enchanted Blade. You may still want Fine Clothes if you can't reliably fetch your blade, potentially replacing it as you go. Later on, it's more up in the air, but Guardians may want to veer towards Timeworn Brand. While The Hungering Blade will also do the trick, its reliability means it's not for everybody.

Other classes didn't have the same damaging options available, so they'll want to focus more on tools to boost their . Evasion is still an option if you're able to avoid running back into it after you're done, and Waylay could help you bypass the fight altogether.

Ruduen · 825
this summary is very useful. I met these guys with Tony and Akachi and poor tony was really having difficulty handling them. — Lord Phrank · 75 1/11/20
Hypnotic Gaze can't deal damage to poltergeists because the poltergeist's own attack deals no damage. — TheNameWasTaken · 3 1/13/20
Thanks for the heads-up - updated to remove Hypnotic Gaze. — Ruduen · 825 2/12/20
Both versions of Disc of Itzamna can also neatly deal with Poltergeists. — RollanPyro · 90 11/13/20
3

Poltergeist's balancing seems really weird to me. On the one hand, if you bring investigators who fight with Spells or Relics regularly, like Agnes Baker or Sister Mary, these things basically serve as Ghoul Minions with 1 extra fight, barely a roadbump on the way to victory. On the other hand, if you don't bring those investigators, these things can form a significant time suck, requiring you to Parley with them, chanting "Go away, go away, go very much away" until they're gone. And if you didn't bring those investigators and the investigators you did bring have some non-traditional way of gathering clues, like Lockpicks, Drawn to the Flame, or Grete Wagner, meaning that you can usually afford to go without high base , these things become a nightmare, a slog almost like the infamous Base of the Hill from Where Doom Awaits. On the bright side, the Geists can be evaded, but even that's a bit of a tall order at 4 evade, especially since you might have to do so multiple times if you have to double back to where you left it later in the scenario.

The worst part, to me, about these three different difficulty levels ("easy" if you pack Spells or Relics, "somewhat troublesome" if you don't but pack high investigators, "evade because that's virtually the only way you can interact with these things" if neither is true) is how much it feels they penalize players with a limited collection. Yes, it is possible to tech around Poltergeist if you have the full card pool, but, as the Spartan's legendarily said, "If." If you're a new player who's heard good things about Carcosa, bought it, and is facing it with just the Core, good luck. On the other hand, if you're a veteran with a full collection you have so many options for dealing with this things that it basically isn't a challenge anymore. It's not fun when you're starting out because your options are too limited and it's not fun when you're settled in the game because, without its invulnerability, the Poltergeist is incredibly basic.

I believe I understand what FFG was trying to do with the Poltergeist; prevent s from mindlessly going "I attack the enemy" every time they draw an enemy, while also allowing s to provide at least a bit of support in combat. But the way they executed those ideas in Poltergeist just makes me scratch my head and wonder if Striking Fear would be a good replacement set for The Pallid Mask, as it would be more interactive with my current card pool.

NightgauntTaxiService · 46
Mind blank also works for 0-2 mystics. — MrGoldbee · 1315 11/15/22
If you know you might face this guy better put some stuf — Tharzax · 1 11/15/22
Us full stuff in your deck. As a guardian you can take an enchanted sword or the brand of cthuga with you. Seeker can use blood rite to get rid of him and rouges have riastrad who can handle this guy. Just survivors have no card in their pool to handle it without more xp or their off class access — Tharzax · 1 11/15/22
This card "haunts" the players twice in the campaign. In "Curtain Call" and "Pallid Mask". Of course, with a full collection the guardian can take "In the Thick of It" and "Brand of Cthugha". Or "Enchanted Blade" as a 0 XP solution. But that's, what the reviewer said so. And for the Mysitic, the Ghost is a joke. Sure doesn't need "Mind Wipe" for it. The circumstance, that it apeares so rare in the campaign also does not rewards building the deck around it. — Susumu · 271 11/15/22
@Tharzax, you're right, with the full card pool virtually every class has at least some method of dealing with the Poltergeist. However, my point was that, with a limited collection, options to handle the Poltergeist, especially outside of Mystic and Seeker, are almost too restrictive to work around. With just the core and starters, Poltergeist basically reads "You must run at least 1 Mystic or Seeker in your party. If you don't, you can never get rid of Poltergeist." You're right, there are options with the full card pool, but without it Poltergeist is too restrictive. — NightgauntTaxiService · 46 11/16/22
Yes it's one of the tougher enemies if you have a limited carpool or don't expect it. But I think it's not too restrictive since you have several options for defeating it. Even if you can't just evade it and leave the location. Even with the base set you have plenty options for card you can commit. — Tharzax · 1 11/16/22
With a limited cardpool, you should probably be running Manual Dexterity and Unexpected Courage or whatever other panic-button skills you do have access to? He's not a hunter so one big agility or two intellect tests should do it. — housh · 141 11/16/22