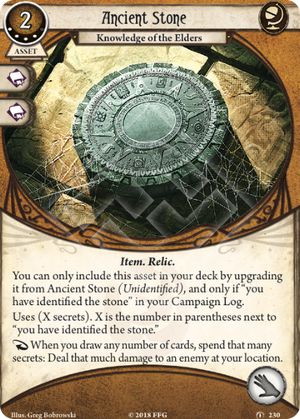 I think this card is a bomb. I think this immediately becomes one of the highest-priority Seeker XP cards. You'll still want to pick up Higher Education first, of course (which will conveniently help with identifying the Ancient Stone.) But I wouldn't wait too much longer to get this going. This card is going to make you win much more reliably.

Test-free damage is golden in this game. There's a reason why Agnes Baker is almost always ranked as a high-tier investigator, why Zoey's Cross is one of the best special investigator cards, and why Beat Cop II is one of the best uses of 2 XP. The primary source of challenge in this game comes from enemies, and being able to kill them or finish them off without any skill tests makes the game way, way easier.

Obviously, you can combine this with Cryptic Research, Search for the Truth, Analytical Mind, and the like, all of which are just absurdly powerful plays. But don't forget the simpler skill cards like Perception, Overpower, Eureka!, etc.

The synergy for Daisy with Old Book of Lore is going to be incredible, too, although the hand slot consideration makes this tricky for her. Still, that's going to be extremely powerful when it works.

I think the number of secrets you need to make this a good card is actually quite low. Even at four secrets, I think this card would absolutely be worth it. You should be able to get a lot more than that--I see no reason why you shouldn't get seven secrets on this thing--which makes this just amazing, in my opinion.

Finally, remember that reaction triggers are optional. So if you find yourself in a situation where you're drawing a card but the point of damage won't make a difference, you don't have to waste a secret.

CaiusDrewart · 2498
Yes, this card is fantastic! — mogwen · 224 9/17/18
What I wanted to say before pressing enter (grrr!) is that this card has a wonderful interaction with scavenging Minh! — mogwen · 224 9/17/18
And (Grrrrr!) that tou can take it back from your discard to play it again and deal an insane amount of damage or prevent your party from ever losing to horror! :) — mogwen · 224 9/17/18
Good call on the Scavenging interaction--it will absolutely be possible to get this into your discard, so that could be quite strong. — CaiusDrewart · 2498 9/18/18
I'm slightly concerned about this card, to be honest. I'm not sure the Seeker faction needed an effect this powerful. I feel like test-free damage could have stayed confined to the Guardian class and Agnes. Hopefully this card won't end up being quite as dominant as I suspect it might be. — CaiusDrewart · 2498 9/18/18
If you find the stone too strong, well, you can use shrewd analysis to add a little uncertainty, will u have the damage or the horror healing? I've build a Minh Deck like this, pretty funny — mogwen · 224 9/18/18
https://arkhamdb.com/decklist/view/7180/minh-thi-phan-archeologist-a-scavenging-schrewd-analyst-1.0 — mogwen · 224 9/18/18
Still, which card is better - Zoey's Cross or Lightning Gun? I would always be more glad of LG, therefore imo Acidic Ichor is still better option and first pick. Would I need both solution and stone in my Seeker's deck especially when that second one needs to be built around it to get real value? Well, I'm not convinced. — KptMarchewa · 1 9/20/18
@KptMarchewa: I'm not sure that comparison quite holds up. Is Lightning Gun a better card than Zoey's Cross in a Guardian deck? Sure. But Acidic Ichor is much worse than LG on high levels (it's cheaper, yes, but also far, far harder to hit with, which is a real problem). Conversely, Ancient Stone is probably going to be even stronger than Zoey's Cross, with the ability to more easily deal extra test-free damage to a single target. — CaiusDrewart · 2498 9/22/18
Not that Acidic Ichor is a bad route, mind you. That card is excellent, too. But I would actually say that Acidic Ichor requires more building around than Ancient Stone does. Acidic Ichor requires that you have a bunch of cards that boost Combat (or, again, you'll just miss), which is awkward for a Seeker. Not impossible, but awkward. Ancient Stone gets better if you have some good card draw, but that's probably something Seekers wanted to have anyway. — CaiusDrewart · 2498 9/22/18
All in all, I would say that on low levels, where the "test-free" part of Ancient Stone's test-free damage is not that important, and Acidic Ichor is very easy to hit with, I would agree with you that Ichor is the stronger pick. On Expert, I think the Ancient Stone is considerably better. Though both are good, and having both in play is going to be both affordable and very powerful. — CaiusDrewart · 2498 9/22/18
I am pretty impressed with both of these cards. Not only can you trigger them passively or with your own cards and actions, but you can also trigger them off location draws. There are a surprising number of locations in every campaign that let you draw cards! — Myriad · 1106 9/28/18
How do you get this into your graveyard reliably to scavenge? — QDI · 1 1/11/19
Note that because multiple cards drawn from a single game effect are considered to be drawn simultaneously and not one at a time, neither version of the Ancient Stone can divide a single 2+ heal/damage among multiple targets. Nor, on the wording of the card, is it permitted to spend fewer secrets than the number of cards drawn by the said game effect, e.g. you could not spend just 1 secret after playing Preposterous Sketches to draw 3 cards; it would have to be 3 secrets or else not use the Ancient Stone reaction-trigger at all. — Cluny · 46 1/14/19
@QDI This card takes up a hand slot, so you can get it into the discard pile just by playing another item over it. — Katsue · 8 4/19/19
During combat(or maybe ivade) test, I used thus stone to kill a 1-health-enemy. Then what happens next? Does the enemy die after resolving the test OR does the test just ends due to the defeat of the enemy? — imajjine · 1 10/17/19
Oops sorry for my typo — imajjine · 1 10/17/19
I’ve been combining this with Occult Lexicon/Blood-Rite. If you have the Stone out and 2 resources on hand, playing Blood-Rite creates 2-4 testless damage to any enemy at your location, no matter if it’s engaged with you, engaged with another investigator, or aloof. When you use it for 4 damage, you only lose 2 secrets from your stone, keeping more for later use. You could possibly have multiple copies of Blood-Rite in hand, setting up massive guaranteed damage, even against the toughest enemies in the game. Powerful combination, but it takes both hands! — mbooradley · 5 4/24/20
Any seeker can add Scavenging with Versatile to their deck. With seekr drawing and tutoring effects, they should have no problems with the increased deck size. — Django · 3683 8/9/20
3

I ran this alongside Occult Lexicon in a big hands Harvey Walter deck through TCU and the effect was absolutely bonkers. Between this (sometimes in both hands mind), Cryptic Research, Blood-Rite, and Harvey's Passive, Harvey's ability to just delete anything (this works on elites) was frightening, given I primarily built him to be a swift clue-gatherer.

An undeniably lovely alternative or companion to Acidic Ichor. It works especially well for Minh Thi Phan, who should be built around card-draw abilities anyway, but basically any Seeker would be glad to have this, if they can spare the hand-slots for it.

Remember that attacks of opportunity are resolved before the effects of the action that triggered them, so simply taking a normal draw to deal the last point of damage on an enemy isn't ideal. Consider having a partner engage it before your turn begins.

Knowledge of the Elders makes most of your cards with drawing effects better, including innate skills like Perception, but the clearest benefit comes from Cryptic Research, which temporarily turns Knowledge into a fast automatic three damage. You should also insist your partner get Stand Together, if able, and you might likewise be interested in Lucky Cigarette Case. I don't think I'd bother with Preposterous Sketches or Laboratory Assistant in the current mix, but maybe there's a way to make them worthwhile? If some future card comes up with a recurring ability to draw 2 cards (like, say, a Seeker-ish variant of Dario El-Amin that gets cards instead of resources), Knowledge will truly be power.

Bringing this "weaponized draws" concept back to Minh for a moment, Analytical Mind plus any successful innate skill means two card-draws, and she can get those draws by contributing to another investigator's skill-check anywhere on the table. In fact, if Minh ever has Analytical Mind and Knowledge in play, have her draw the first encounter card - there's a decent chance she can draw and kill an enemy before the Investigation phase even begins!

The main alternatives we need to discuss are Acidic Ichor and Minds in Harmony. The more important of these is Ichor.

The hand-slot requirement might be a deal-breaker for Daisy Walker, but I don't think the hand-slots are a huge deal for other Seekers. Magnifying Glass is nice; Flashlight isn't usually a Seeker favourite; Encyclopedia is nice, although some of its utility has been absorbed by Higher Education; most other tomes aren't that important. In fact, even Daisy might eventually settle on using only Encyclopedia for her free tome action, so even for her Knowledge isn't totally out of the question.

Notably, Knowledge is vastly better than Ichor for dealing with aloof enemies, such as Whippoorwill. It's also nice to have a way to trivially remove Acolyte, and many other one-health enemies, for just one secret. Those enemies also tend to deal low damage, so it's often easiest just to draw your card and take the attack of opportunity.

I think Knowledge and Ichor are on roughly equal footing. Knowledge is slightly more powerful, given its reliability and its ability to function without necessarily taking actions, but Ichor is more versatile, and can yield a greater amount of damage across the scenario, especially if you're willing to commit to Level 3 Emergency Cache. Ichor's also the better pick against boss enemies for its ability to deal lots of damage in one turn, but if you're playing alongside someone who can get Lightning Gun, M1918 BAR, or Chicago Typewriter, maybe that doesn't matter so much. It's probably safe to say "Ichor on Normal, Knowledge on Expert," although in either case I'd want to eventually get both.

I have a slight preference for Knowledge of the Elders over Minds in Harmony, given that horror-removal is less likely to be useful to a Seeker than auto-damage in a random hypothetical scenario, but I don't think it's a slam dunk in the same way as, say, Acidic Ichor over the other Strange Solutions. If I were to draw two Harmonies using Shrewd Analysis, I'd shrug rather than gnash my teeth.

sfarmstrong · 244
Regarding your Mihn tactic, there's a question whether this can trigger on drawing from the encounter or exploration decks. If the ruling on Dr. Henry Armitage is a general ruling ("Unless otherwise specified 'drawing a card' always refers to drawing a card from your investigator's deck."), then they don't apply. — CSerpent · 99 11/1/18
Never mind, I missed the Analytical Mind part of the approach. — CSerpent · 99 11/1/18
Does this work when you draw an encounter carte ? — LeFricC&#39;estChic · 81 1/14/20
1