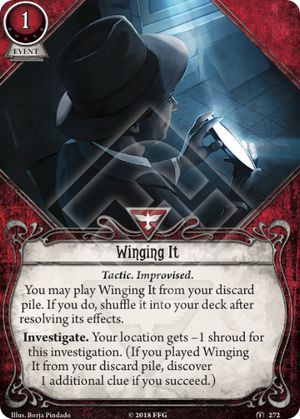 This is to Investigation what Improvised Weapon is certainly not to combat.

The kicker is the + 1 clue, this mechanic is so very hard to come by, multi-clue pickup is rare and powerful, and the audience that has access to this card will appreciate it! Wendy Adams can drop the card initially for her ability and just cash in for the clue benefit. The other dudes, despite their lower stats, can still play this card on 1 difficulty locations to trick up clues just as they would with "Look what I found!". Out of faction Minh Thi Phan can play this alongside Deduction to hit impressive clue gathering speed and Finn Edwards might even give it some though.

Wendy Adams and Finn Edwards can even combo Winging It with Double or Nothing to net 4 clues!!

Unlike Improvised Weapon where the first play of the card is rather iffy, there is actually an extra bit of usefulness for this card, you can lower a 3 difficulty location to 2 difficulty, putting it into the "Look what I found!" combo sweetspot like a Flashlight would. This greatly extends a character's ability to gather clues, especially if said character has their hands full with a Baseball Bat, Ornate Bow or the like.

Is this card better then Deduction? Probably not, but it's good for what it's made to do, surprisingly flexible, and a fresh source of multi-clue gathering.

Tsuruki23 · 2350
This card unlike most clue gathering cards such as deduction does NOT have the restriction of gaining the extra clue from your location. This card will allow you to gather a clue from a location without any clues on it. In that regard i believe it is a very strong card as you can use it on an already low shroud location or clue depleted locations and unreliability do this more than once. — Roarket · 1 10/13/18
@Roarket: I am very skeptical that that is how this card works. That seems extremely unlikely to me. — CaiusDrewart · 2816 10/14/18
Honestly i think its an oversite or typo but thats how the card reads when put side by side with cards like deduction or look what i found. Seems quite strong being able to get a clue that is not from your location. — Roarket · 1 10/14/18
Absolutely an oversight though. it would make this card outshine Seeking answers so dramatically that you'dd wonder why they even printed it in the first place. — Tsuruki23 · 2350 10/14/18
Also, Mark can take this card since it's a tactic, which when you add in a use of Sophie effectively ups his Int to 5, which is more than enough to lift a clue from 2 or 3 shroud locations. Pair it up with Mark's beloved Key of Ys (once it get's online) and you have a two action combo that can lift 3 clues off a location WITH MARK. I mean, you could even put a single copy of this in your deck and attach it to Stick to the Plan, although that might be a suboptimal use of a slot. My personal Mark build probably needs Extra Ammo, Always Prepared and Cache in there too much. — Apologised · 3 10/15/18
Agreed. Absolutely an oversight. It is the only player card mentioning discovering clues that doesn’t clarify where it is from, but it certainly isn’t from the clue bank since ‘discover’ means move a clue from a location to an investigator. Cards that move clues from other places (Such as in The Last King or at the Clover Club Cardroom) use different language. — Death by Chocolate · 1258 10/15/18
While the investigate action allows you to discover one clue from your location, player cards allow you to modify what the investigate action does. Cards allow you to do various things such as gain an extra clue or instead gainng resources (ie burglary). Thus this card does not specifiy where the clue must come from but simply that you are to gain the extra clue upon success. — Roarket · 1 10/16/18
Go read p6 of the rules under "clues". "If an investigator discovers a clue, he or she takes the clue from the location". You are dead wrong @Roarket, and ALSO forget the Grim Rule wouldnt allow it anyway. It doesn't matter how the investigate action is changed when its the terminology of discover that you need to revise on. — The_Wall · 262 10/16/18
This is a pretty great Minh card. Once her deck gets really thin she'll be drawing it every few turns. It's a bit trickier to actually discard it, though, unless you're playing Cornered Minh. I mean, you could discard it to hand-size, but that's harder than you'd think, especially if you're running Lab Assistant(s). — Zinjanthropus · 213 5/31/20
Does this card have to be on top of the discard pile to be played or can I dig for it? I tried to find a rule about playing cards from the discard pile without any success... — andyhaggis · 1 11/17/20
You can't alter the order of cards in discard piles, but you can look through them freely. It doesn't have to be the top card to be played. — Linderwood · 4 11/25/21
5

I really underestimated this card. Winging It is one of the best clue gathering tools around for Survivors. -1 Shroud may not seem like a lot, but it makes any 3 Shroud location "Look what I found!"-able: when played from the discard pile, you can guarantee you'll net 2 clues from a 3 or less shroud location. Even better- this shuffles back into your deck after being played from the discard pile, so you can simply Drawing Thin yourself into it over and over again.

This is especially nice for people who don't have hand slots to spare for Flashlight or Lantern. Rita Young for example likes using both hands for Baseball Bat and Ornate Bow. Similarly, William Yorick builds sometimes rely on the bat and Old Hunting Rifle. Survivor versions of Tony Morgan should probably consider this card as well since Tony will likely have his hands full with a pair of Colts.

Both Wendy Adams and "Ashcan" Pete can use their special abilities to throw it in the discard and get the better activation of the card earlier. Calvin Wright can use it to help delay Voice of the Messenger slightly (along with Impromptu Barrier and Improvised Weapon). If trying to keep Calvin as trauma light as possible for future campaigns, this seems like a pretty necessary way to go about it.

StyxTBeuford · 12744
Why would Rita use this? Sounds like you're banking on finding a lot of 1-shroud locations, or otherwise the +1 clues will never trigger. Think there's better options over including this just to make locations LWIF-able — flamebreak · 19 1/30/21
1

I highly recommend Winging It in a Norman Withers deck.

Winging It has 1 cost, so can be played for free from the top of your Deck with Norman's ability. Norman would often be doing basic Investigate actions anyway, so seeing this on top of your deck essentially gives him card draw, much like fast 0-1 cost events.

His Signature Weakness, The Harbinger disables your Deck, allowing you to infinitely replay Improvised events from your Discard pile, without shuffling them back into your Deck afterwards. With your Weakness out and Winging It discarded, you've an got an endless 1 cost source of -1 Difficulty, +1 Clue Investigate actions. Use Sleuth or Dr. Milan Christopher to mitigate the cost.

In order to setup this combo, you must find Winging It before revealing The Harbinger. Norman has access to recurring searches to help ensure this happens:

You will have to take Versatile to include it, which decreases your deck's consistency with its +5 Deck Size, but there are a few benefits to that as well:

Linderwood · 4
Versatile definitely doesn't save you having to pay experience for level 0 cards, though it does give you access to them. Maybe Adaptable does? — Thatwasademo · 44 12/27/21
er, having to pay increased experience costs - obviously if you're adjusting to meet deck size after adding Versatile or exiling a card, a level 0 card with no chains is free — Thatwasademo · 44 12/27/21
I see what you're saying, and would have agreed with you until recently. It definitely feels wrong to do so... They're chained to cost experience to purchase, but remain level 0 cards. In the FAQ, point 1.18 under the 'Game Play' section states that: "...(An) investigator must purchase cards so that a legal deck size is maintained. When purchasing cards in this manner, that investigator may purchase level 0 cards at 0 experience cost until a legal deck size is reached." This applies if cards are forcibly exiled, removed or deckbuilding restrictions are updated. Arkham db's deck upgrading feature seems to follow this too. Purchasing a chained +exp level 0 card costs that much experience from your current upgrade. Filling in cards to meet your new deckbuilding requirements from Versatile does not. Perhaps this is just an oversight? — Linderwood · 4 12/27/21
*Adding chained level 0 cards to meet your Versatile Deckbuilding Requirements after an upgrade does not spend experience on ArkhamDB. — Linderwood · 4 12/27/21
That's clearly not the intent, and there's a reading of that sentence combined with the introduction text of The List of Taboos that doesn't mean that (applying FAQ 1.18 before the Chained modifier) -- if anything is a place to apply the Grim Rule, that is. — Thatwasademo · 44 12/27/21
If the FAQ would say, "that investigator may purchase ANY level 0 cards at 0 experience cost until a legal deck size is reached", I would give you a point. But as written, it is clearly just replacing the 1 XP you would normally have to pay to add a new card to your deck. Don't forget, the Taboo list is an optional variant, so it makes sense to not cover it in this paragraph. If you want to play with Taboo, you have to pay for the chained cards. Abusing such a highly questional loophole would defy the purpose of the Taboo list. — Susumu · 271 12/28/21
"The Grim Rule only comes into effect if players are unable to find the answer to a rules or timing conflict, and are thus unable to continue playing the game. It is designed to keep the game moving when looking up the correct answer would be too time-consuming or inconvenient for the players. The Grim Rule is not an exhaustive answer to rules/timing conflicts.". This is 100% not a place to apply the grim rule, if you are deck building/spending XP it is not preventing the game from advancing because you aren't in the game. That being said, I agree that FAQ1.18 applies before the chained modifier — NarkasisBroon · 10 12/28/21
Simply because taboo is an extra set of rules that take place over the existing rules. The core rules say you can purchase drawing thin for 0xp. The taboo rule says purchasing drawing thin costs +3 XP, 0+3=3 — NarkasisBroon · 10 12/28/21