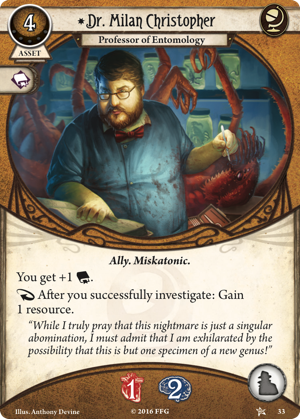 AndyB's review of Dr. Milan Christopher pretty much holds up. But now that a year has passed, I'd like to take a moment to reexamine this highly-acclaimed card.

I think Dr. Milan Christopher is clearly the strongest multiplayer Seeker ally in the game. I don't think any of the primary-class Seekers (Norman, Minh, Daisy, Rex) can do any better. I strongly recommend him for Carolyn and Finn as well.

What makes Milan so good? Well, first, the +1 Intellect is really important, especially on high levels. On Expert it is incredibly valuable to get to 6 or 7 in your primary stat. Milan's bonus makes a huge difference here.

What is really special, though, is the resource generation. In multiplayer, Seekers can and should spend the vast majority of their actions investigating; this means Milan, who does not exhaust upon activation, will trigger over and over. It's extremely common to get 2 or 3 resources a turn from him. The profits become immense very quickly.

But what are you going to do with the enormous piles of money that Milan produces? Well, there are tons of good options. The world is your oyster. But the simplest and most reliable way to spend them is on the XP permanents--Higher Education (for the Seekers), Keen Eye (for Carolyn), and Streetwise (for Finn). Note how all of these can boost Intellect even further (among other abilities). That means you can spend money to crank up your investigate tests even further, so you have excellent odds even against even the Expert chaos bag, and then have Milan get you your money back!

Obviously, this approach reaches its zenith with Rex Murphy. The combined bonuses of Higher Education and Milan makes triggering his ability pretty easy, even on Expert, and Milan's resource generation means he can investigate at a furious pace over a sustained period of time. He comes pretty close to investigating twice as fast as the other Seekers--and the other Seekers are already going pretty darn fast.

Milan is a weaker pick in solo. There are far fewer clues to be found and hence fewer activations of his ability. Moreover, investing so much (4 resources and the ally slot) in the early game into something that boosts cluefinding is probably not what solo Seekers need to be doing. Something like Dr. William T. Maleson (with the goal of avoiding monsters) might be better.

In multiplayer, though, Milan is just dominant. Now, the other Seeker allies are fun, too, and if you want a change of pace there's nothing wrong with using Horowitz to find some relics or Maleson for some encounter deck manipulation. But if your goal is to be the most effective Seeker you can be, this is the guy to pick.

CaiusDrewart · 2816
In 4 player Milan is really great with Teamwork or Charisma and Charles ross (seeker paying items of other characters). — Django · 4434 6/29/18
Yes, these are both nice options if you're not using XP permanents, perhaps for the sake of variety or because you're Norman. — CaiusDrewart · 2816 7/2/18
the designers learned from their mistake in the subsequent expansions and now most allies can only be used once per round — jd9000 · 69 7/5/18
@jd90: Yep. If this guy just exhausted after use he would be way, way more reasonable. (And Seekers would have a much more interesting choice in choosing their ally.) — CaiusDrewart · 2816 7/6/18
13

Even for groups that don't regularly observe Taboo restrictions, Dr. Milan Christopher's change to exhausting him (limiting his gain to single resource a turn) is one of the most fair rulings of the Taboos I have seen. It was the first I took into account after my first full playthrough of The Dunwich Legacy; Daisy was regularly ending scenarios with a dozen resources in hand. Zoey looked on in just a little envy.

Even with the new limitation, the good entomologist easily pays for himself in a couple turns, assuming you value a flat +1 Intellect and a little soak is worth 2 resrouces. Seeing as Seekers generally aren't leaping into danger, it's likely your Ally will stick around for some time, perhaps the entire scenario.

The biggest problem with Dr. Milan Christopher is that he exists. While deck building, players shouldn't have to consistently ask themselves "Is this new Ally better than Milan?"

Judicator82 · 18
I think the main question that should be asked is, "can my deck run without him?" I start him in a mandy deck, but quickly replace him with Mr.Rook once I get the exp, of course that's a special case. But everybody has an ally that fits a build, and Dr. Milan is just a solid ally choice. — Therealestize · 47 3/30/22
Too true. Every seeker needs resources and intellect. There might be (slightly) better options, but Dr Milan works in every seeker deck — fates · 33 4/24/22
7

He might seem like he's looking up a recipe for cockroach soup, but Dr. Milan Christopher is by a country mile the best Seeker ally.

Sure, he's fairly expensive. Sure, one icon to commit to a test is weak. But here is an ally who will improve your investigation, and then pay you for investigating. +1 ! Brilliant! He'll soon repay his cost, provided you're investigating enough. And let's not forget, clues are how you win.

He turns Daisy Walker into an intellect 6 clue-hoover - and lets her earn resources for doing it! And Mind over Matter or I've Got a plan become even more awesome.

He turns Rex Murphy into a great investigator, and combos nicely with Burglary and Scavenging. Find a low shroud location to burgle for +4 resources, and retrieve a discarded item! Neat! Or more regularly manage to grab 2 clues at once!

And he can turn a reasonable, normal investigator into a good one. Jenny Barnes, Roland Banks and Jim Culver can all reach 4 intellect and become solid investigators in their own right - though for Roland, I still think battering monsters and collecting clues from them make Beat Cop a better option.

For Seekers though, so far, he's the best available ally.