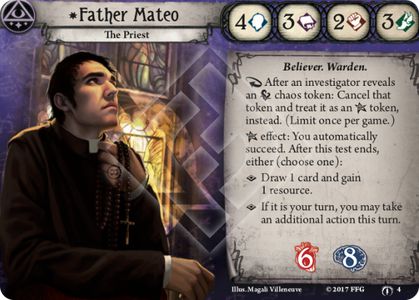 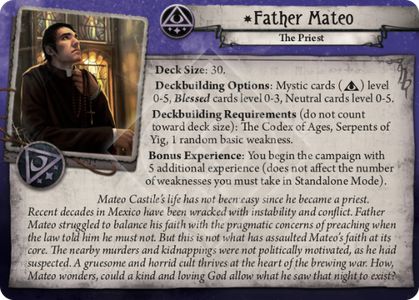 Mateo's investigator ability is one of the most impactful in the game, because it will change the way your group plays, and even what cards they may put in their decks.

Every now and then, you will come across tests which you cannot afford to fail. Suppose someone draws Rotting Remains with 2 sanity left, or the guardian has one last action to take out a monster with doom. Some particularly nasty agendas have tests that add a weakness to your deck on failure. Normally, you can buff your skill test up to the point where you would pass on every token except the , and hope for the best. Mateo allows you to guarantee that test will succeed. And he can do it from anywhere on the map (except when he's napping).

It provides a similar benefit as cards such as "Eat lead!" and Grotesque Statue. However, unlike those cards, his ability

The first point is crucial - if you succeed on the test (and if you threw everything at it, it's very likely that you will), Mateo's ability does not get used up, and is available to use on the next test. Even though it is a once per game ability, it really protects your team all the way until you need to use it, and saves your defensive cards like Ward of Protection and "Let me handle this!" for when they are truly needed.

Mateo also enables the group to perform riskier strategies by making high leverage tests safe, such as grabbing multiple clues using Deciphered Reality, or gathering multiple enemies together to unleash a Storm of Spirits. Your guardian can now Shotgun the monsters without accidentally murdering the seeker. Notably, cards that becomes stronger the more you succeed by benefit the most. All In is now safe to play without risking your entire investment, and Archaic Glyphs becomes repeatedly abusable.

The fact that Mateo starts off with his ability ready to use shouldn't be overlooked. Even Seal of the Elder Sign, the ultimate combo card, requires you to both draw the card and be at the same location.

Of course, there are a couple of reason why he doesn't steamroll over every scenario - namely, boosting to pass every token in the chaos bag is expensive, and eventually, you will draw a that you can't accept.

Remember that his ability is a reaction, not forced - so you don't have to trigger it if you don't want to.

Mateo's relatively balanced statline makes him less reliant on using his willpower for everything, although you can certainly go that route if you want. Personally, I like St. Hubert's Key which buffs his willpower and lets him handle the lower shroud locations, freeing up the seeker. Shrivelling is a mystic staple, but if you have a guardian on your team to tackle tougher monsters, Enchanted Blade works very well too, with a fully charged stab having a good chance of taking out Serpents of Yig. It is also cheaper and has no risk of self damage. With his 3 , Manual Dexterity will get him out of most scrapes.

If the team is relying on Mateo to pull off his miracles, it makes sense to take cards that let him continue to do that. Seal of the Elder Sign is worth the two copies, and Premonition and Time Warp complement this role.

Mateo has access to Blessed cards. There aren't too many of them, but the stand out one is Alter Fate. The combo with Dayana Esperence is extremely powerful, and only accessible to Mateo and Marie Lambeau. If you want to abuse it, pack in Enraptured.

Other than Dayana, Arcane Initiate is a good ally choice, for fishing out the high XP spells.

The Codex of Ages is a good card that you will probably end up keeping it in hand until you need that , because the seal effect is too painful to keep up, especially in multiplayer. It's a little expensive, but part of the cost can be made up for by either of Mateo's abilities. Playing it triggers an attack of opportunity, making it not so great for monsters, but excellent on mythos cards like Locked Door or Entombed. Keep in mind that Serpents of Yig prevents you from playing the Codex (although the reverse is not true).

Sadly, I think the good Father is pretty bad, at least as Mystics go.

Firstly, he seems to be missing a stat point (at least compared to the mono-colour + trait template that Mark and Akachi set,). Although Silas too is missing this point, so perhaps it is deemed that "Blessed" and "Innate" is better than "Tactics" and "Spells", which might be true for Innate, but certainly is not for Blessed.

Compared to Agnes or Akachi, he is considerably weaker. He is missing the 5 willpower, which as we know from Jim is huge, but he is also missing the free damage or the spell charges, both of which are considerably more powerful than his own once-per-game (OPG). Compared to Marie, he lacks the investigation options or bonus actions. He compares more favorably to Jim (the current weakest mystic), but even here he loses out. Jim has more support cards now, and is generally seen to be more of a solo-investigator, and has the any-5-splash. Mateo's low strength means solo can be an issue, as he has very little options for the extra 1 point of damage on 3-health enemies if he can't find his Shriveling.

His unique asset (Codex of Ages), is good if you want to pass a single test, but its expensive, uses a hand-slot, and is especially bad in multiplayer where sealing that Elder Sign for more than 1 or 2 turns hurts the whole group. It has uses, eg, with a big Storm of Spirits play, or a Double or Nothing, but these are pretty situational. Combined with his OPG, which can only trigger on a tentacle, and you have two very niche abilities, neither of which really shine.

Then you have his weakness (the Serpents of Yig)... and by god will you hate this guy. His 3 health means that, unless you have Shrivelling5, it will take 2 shots to kill at least. He is difficult for you to deal with without big spells, his damage is pretty high, and he seals the token. He's worse than the Silver Twilight Acolyte, which is one of the worst weaknesses you can draw, and adding spiky-weaknesses to a spiky-class is never great. Every now and again, you will draw the Serpents in turn 1-3, before you can find your Shriveling or Mists, and it can be crippling.

So where does this leave you? Well, his one saving grace is the +5 XP he gets at start (or in standalone). This is meant to make up for all of the above. You have lots of options here, but they tend to fall on one of the following lines:

The impact of this XP boost can be high, especially in the first 1 or 2 scenarios, although towards the end of the campaign you're likely going to notice it less.

Overall, having played the Father in a few campaigns now, I've found him to be weak and a bit boring. I'd like to see him have many more cross-colour Blessed cards to open up his options before I'd want to play him again on Hard.

duke_loves_biscuits · 1137
I agree. I also found Father Mateo a little bland, and the fact that Blessed cards are doing anything for him is a little sad. I think he's definitely competitive with the other Mystics early in the campaign. The 5 XP makes a big, big difference. But later on it's not as noticeable (the difference between 35 and 30 XP is far smaller than the difference between 5 and 0 XP), and he feels very vanilla. — CaiusDrewart · 2816 7/5/18
*Blessed cards are not doing anything for him, is what I meant. — CaiusDrewart · 2816 7/5/18
Having now seen a couple of the Blessed cards (in preview, not yet released), it seems they are going for a buffing and protection theme, potentially unlocking Mateo as a "Support-Mystic". This is a cool direction to go in, and I would certainly love to re-evaluate the above critique once that is possible. For now though, its a waiting game... — duke_loves_biscuits · 1137 7/29/18
I don't understand the hate for Jim, who can play the odds incredibly effectively. His ability nicely negates lower will, balanced stat-line boosted with "0" Skulls makes him a proficient backupfighter/investigator even if none of his spells come out. — Eruantalon · 101 8/22/18
Matheo's elder sign is really strong.(auto-success +free action) With Olivia McBride, he usully draws it 4-5 times in a game. Add Eucatastrophe for extra fun. — DeadGuy · 19 11/22/19
@Eruantalon The problem with Jim is that you usually boost yourself up to beat Skulls anyway, as Skull modifiers tend to be the least bad chaos tokens. So in terms of odds Jim is only relatively effective when he has little hope of passing anyway, which is similar to how Mateo plays. — StyxTBeuford · 12744 12/21/19
52

We'd heard there was a trait for cards

That you could play because you pleased the Lord

But you don't really see new blessed cards, do ya?

And it stayed this way: cycles fourth and fifth

Your decklists composed no Hallelujah

Custom Ammo felt so strong, but we needed proof

The first blessed blue card made was no use to ya

The insults didn’t even stop there

Our jaws drop down and hit the floor

And suddenly I felt we barely knew ya

swaths of new cards that bore your mark

on a new voyage we could embark

With a bold new set of tokens for Hallelujahs

Well, maybe there's a design above

They even work well with Olive

The token fishing deck still held true to ya

from covenants galore and Money Rites