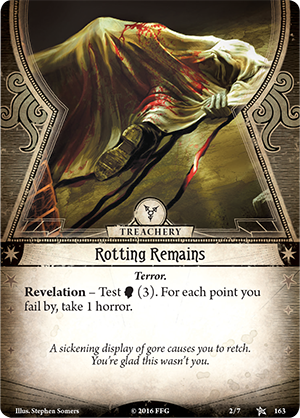 It's been years now since Lita Chantler and pals first confronted the Ghoul Priest all the way back in The Gathering, and the Striking Fear encounter set has been terrorizing us ever since. Are there any other cards that feel more like frenemies than these guys? They're familiar, adversarial, and you can always rely on them to show up for you at some point when you'd rather they didn't. But you can't stay mad at them for too long - after all, they're such a staple of the Arkham experience that the game just wouldn't be the same without them. It's like, "Oh Rotting Remains, you gave me yet another mental trauma - you rascal!"

With that said, it's this set's very ubiquitousness that merits its members a legitimate analysis. After all, these cards aren't restricted to a specific scenario, so you will run into them over and over again. As such, it's probably worth asking yourself what you need to include in your deck to deal with them specifically. What's worse is that they tend to appear in encounter decks alongside scenario-specific treacheries that amplify their nastiness.

The two general considerations in choosing what cards to include in your deck to deal with these are: (1) What investigator am I playing as? and (2) What difficulty am I playing on?

Of the three, Dissonant Voices is probably the most straightforward to analyze. Regardless of the game state, most of the time you're just going to eat this card. You should generally be playing your assets instead of holding onto them, so hopefully this card hits you after your board is already set up. The loss of playing events hurts a little more, but should hopefully not affect your turn too drastically. After all, you always have other things you can be doing, such as drawing a card, punching an enemy, or investigating your location. And the card disappears at the end of the round anyway - with no check! So grit your teeth and deal with it.

The other two cards in the set - Frozen in Fear and Rotting Remains - are significantly more troublesome. Even though neither possesses an unconditional penalty (you can escape unscathed if you pass a skill check), the punishment for failing is harsh, and can often be deadly. In addition, the nastiness of both of these cards scales upwards with the difficulty you are playing on. As to which card is worse? In my opinion, it's a toss up.

Frozen in Fear will almost always cause you to lose at least one action. It's uncommon to have a turn where you don't perform one of the listed actions (move, fight, or evade), though this will depend somewhat on your role on the team. In general this card is less of an upset to Seeker investigators, who will often be content to stay put and perform investigations, and who have access to other movement options such as Shortcut or Pathfinder. Guardians - who will usually be taking fight actions more than the other factions - are probably hit the hardest by this card.

Of course the worst part of Frozen in Fear is that you have to pass a will check to get rid of it. Here's where the number of players becomes an additional factor: On solo mode, each lost action is a much larger percentage of the total actions available to you; never mind the fact that it can be tougher to pass that accursed check without any teammates to help you out by committing cards. Failing this test more than once in solo mode is going to be game over a lot of the time.

As for Rotting Remains, this card scales in a particularly nasty way with the difficulty level. Not only is it harder to pass the check at the tougher levels, but the higher variance will on average lead to worse results for a failed check, even if you're boosting to the corresponding sweet spot. For example, if you are playing on Easy and boost yourself to +1, you'll only take 1 horror for drawing the worst negative token (in this case a -2, ignoring special tokens). On the other hand, if you are playing on Expert and boost yourself to +4 (as you should), you'll take the full 3 horror for drawing the -8 token.

As for how to deal with these cards, you have three basic options:

And this is where your choice of investigator comes into play:

A quick note about Roland Banks specifically: these treacheries are so bad for him a higher difficulties that I always opt for Dr. William T. Maleson over say, Art Student as a secondary Ally when moving up from Standard to Hard. Keep your fingers crossed that you draw an enemy to punch so you Roland can get his clue back!

In summary, the Striking Fear set embodies everything we love and hate about the encounter deck. I'm sure it will continue to make our lives miserable for years to come, so we might as well be prepared for it.

bricklebrite · 289
I'd say Gaurdians have pretty great Willpower. They're the second highest average of any faction (two 4s, four 3s). I think Rogues honestly have the worst time dealing with Rotting Remains since their Willpower is the lowest on average and their sanity is the second lowest on average. — StyxTBeuford · 12473 11/2/19