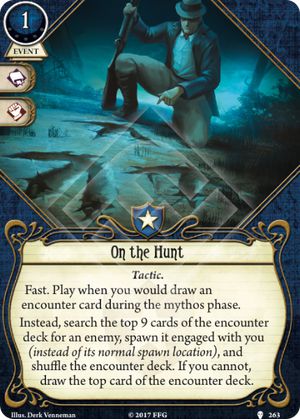 Dissenting Opinion: I don't like On the Hunt that much and have had mixed success with it. I've got two central issues with the card: the first is that it misses pretty frequently, the second is that I don't like it's cost ratio.

Sometimes it misses and draws no enemies at all (a terrible feeling, as you've just taken a nice and easy shuffle and thrown it away). Sometimes it hits but you were going to draw an enemy anyway. Sometimes it fishes a hard monster you weren't going to see for a few turns. Sometimes it finds you an enemy that was going to spawn somewhere unimportant and you could have just ignored. Sometimes it even drops an enemy on you that you dislike (like Poltergeist), which might be OK if you are Leo or Skids and are Adaptable (and can leave it out for such scenarios), but most Guardians don't have that luxury (and anyway, there are usually better things to do with Adaptable).

And yes, it helps protect your friends by thinning the deck, but it doesn't lower the chance of them also drawing a enemy by a huge amount, and does increases the overall amount of enemies the group has to face (on average). Enemies are generally the worst treacheries. You're here to make sure they die, but you'd still rather the team as a whole faced as little enemies as possible.

Don't get me wrong, it's not a bad card. More often than not it does what it's supposed to - find a monster, thin the encounter deck, protect your teammates (sortof), and give you something to shoot at. As another reviewer points out, it also finds XP enemies when you want them, which is kinda nice. But I find than when I weigh all this against its downsides and my experiences from playing it, I hesitate at giving it a deckslot.

A good comparison for me is "You handle this one!", which by contrast I think is fantastic. YHTO always hits, always does something of value, directly protects the team's weak points, and gives the Rogue a resource for his trouble. I'd much rather the Rogue passed me his monsters with YHTO and I just take my own treacheries in the face (especially if he's drawing after me). I'm a hero, I can take it. Just so long as he finds all the clues and gets us both the hell out of here.

duke_loves_biscuits · 896
I agree. I think this card is grossly overrated. — CaiusDrewart · 2384 8/15/18
At first I thought this card could be played after you had drawn a treachery (which you would then throw away and get On the Hunt's effect instead.) So that was pretty exciting! But that's not the case. Anyway, I wouldn't play this outside of Roland, and I don't think it's that tremendous even in him. — CaiusDrewart · 2384 8/15/18
One more usage point: it's obviously important, if you're using this card in multiplayer, not to be the first one to draw encounter cards. If the Guardian fishes out a a big monster first, then the Seeker and Mystic draw mythos cards and both get monsters, that's obviously pretty bad. But if the Seeker and Mystic have already gone, playing this looks better. It makes the monsters more evenly paced throughout the scenario, which has value--you generally don't want monsters coming in clusters. But I still don't think the overall return from this card is very good. — CaiusDrewart · 2384 8/15/18
Personally, I don't find this card useful if you don't have other effects to combine it with (like Roland's ability and Scene of the Crime) and I sort of agree with the statement that enemies are the worst treacheries, but there are some treacheries which are pretty painful for Guardians (like Rotting Remains and the Yellow Sign) and On the Hunt can protect you from such things. There can also be a few cases that regardless of what cards you have to pair it with, On the Hunt can be a very good card. In Echoes of the Past scenario of the Carcosa cycle for example, On the Hunt can do an amazing job fetching enemies that spawn on locations that are further away and accumulate Doom over time directly into your feet and engaged with you (some of which are aloof) and can save you a lot of time by not having to hunt them down (which is also very thematic for the card in that case). — matt88 · 2213 8/16/18
@matt88: you make some good points. I agree that this card shines in Echoes of the Past--but then that's pretty much the easiest scenario there is! I'm not sure you can really say that On the Hunt protects you from Rotting Remains etc, unless you're peaking at the encounter deck and know the Guardian will draw it. (And if you're peaking with Scrying, you could have assigned it to someone else anyway.) After all, On the Hunt will only affect one draw, and the odds that it saves you from a horror-inflicting treachery are rather low. — CaiusDrewart · 2384 8/16/18
Obviously I mean peeking, not peaking. Sigh... — CaiusDrewart · 2384 8/16/18
Yeah, I don't think this card is really about Treachery avoidance, or even thinning the deck, as much as fetching an enemy for Evidence!, Scene of the Crime, Roland, etc.. Getting the enemy isn't the point, it's what you're going to use them for. There are still relatively few cards that work of that, though. — AndyB · 844 8/16/18
@CaiusDrewart I don't think Echoes of the Past is a very easy scenario. If you can't handle the enemies fast enough it can snowball really hard against you. But anyway, you 're probably right in saying that one draw from On the Hunt can't save you from drawing bad treacheries throughout the course of the scenario and I can't disagree with that, but at least you are safe for the turn you re playing it. And, by the way, since you put Scrying on the table, I'd like to state that with Scrying + On the Hunt you have at least 4 turns of "safe" draws, assuming all 3 Charges of Scrying and at least one copy of On the Hunt are used (obviously in a way that will not make each other conflict). — matt88 · 2213 8/17/18
This card can be like a weaker version "Ward of Protection", depending on enemies present and size of enocunter. You shoudln't play this card if the enc. deck has less than 9 cards, reducing your chance of drawing an enemy. It also comboes well with "Scene of the Crime" , "Evidence" and some investigator abilities (roland, zoey). — Django · 3498 8/17/18
@matt88 re Echoes of the Past: might be a matter of group composition. I really prioritize having a lot of efficient monster-killing available. So a scenario like that where so many of the encounter cards are weak, easy-to-kill monsters is going to fit my group's style pretty well. I imagine if you're an evade-focused group or something it could be unpleasant. — CaiusDrewart · 2384 8/20/18
@CaiusDrewart Group composition matters a lot for sure, but the difficulty of this scenario is not about strong treacheries or enemies, it's about killing the enemies in time before the agenda advances and there are a lot of encounter cards that give you a hard time when trying to deal with that. — matt88 · 2213 8/20/18
@matt88: I suppose. Still, most of the enemies this encounter set spawns are just pathetic, and the encounter cards don't do that much to make them scary. They also put almost no stress on the investigators themselves, which is a rarity in this game. I can only speak from my experience, but it's been by far the easiest Carcosa scenario almost every time. — CaiusDrewart · 2384 8/20/18
"Sometimes it misses and draws no enemies at all (a terrible feeling, as you've just taken a nice and easy shuffle and thrown it away)." — itsthewoo · 1 4/26/20
Whoops. Accidentally pressed the "enter" key. Ignore the above comment. — itsthewoo · 1 4/26/20
Does this card comboes with Diana's ability ("cancels or ignores a card effect or game effect"), by not drawing an encounter card? — Joannes · 1 7/3/20
I don't believe so @Joannes. The cards that work with Diana's ability have the words "cancel" or "ignore" printed on them somewhere in their effects. On the Hunt doesn't do either of these things. It just allows you to draw a monster instead. — Jaysaber · 1 7/18/20
5

There are a couple good uses for this event:

For Roland Banks and William Yorick: fetch a monster to serve as fodder for your special ability.

For all Guardians: Dig for VP enemies in the deck. This is especially valuable in lower player-count games, when the odds are pretty good that one or more VP enemies will go undrawn.

So as Roland or Yorick in a low player-count game, I think this is worth serious consideration. Beware of spawning something really nasty for yourself like a Poltergeist or Conglomeration of Spheres, though.

CaiusDrewart · 2384
Oftentimes, the fact that the enemy is forced to spawn at your location and engaged with you, instead of its normal spawn instructions, is crazy useful. In Dunwich, you can use this to basically skip the mythos phase and get rid of a whippoorwill as zoey with her cross. Additionally, there are many scenarios with tough monsters that you don't want your squishies drawing, or that can pull clues from locations. — SGPrometheus · 514 3/25/18
It's really good for Where the Gods Dwell. — Zinjanthropus · 161 9/4/20
1

Superb card for the dedicated fighter. It ensures that you trigger the benefits that dedicated fighters generally hope to gain, such as William Yorick or Roland Banks gaining items and clues.

It also doubles as protection, many fighters have the ability to kill off basic foes in just an action or two, but those same fighters might fear and passionately hate drawing mythos cards that force sanity damage or some penalty. Case in point: The first line of this review.

-The gathering Spoiler below-

Final note: Also useful to ensure that you've got something to do. For a fighter type character those "dead" rounds with no enemies are bad, they leave you with nothing to do and may cause enemy spawns to be more condensed later, which makes it harder for you to respond to them all. This card lets you guarantee that you've got something to nibble on while your friends do the heavy lifting, a good example for the usefulness of this effect is the very first Arkham LCG scenario The Gathering. Once you're out of the study you can head for the basement or attic and dig out the appropriate ghoul to quickly dispatch for XP.

Tsuruki23 · 1989
Added note that kindof intrigued me (I play LOTR LCG as well, and it has similar mechanics). — NarkasisBroon · 1 4/25/18
Sorry, that was a mistake... first time I have commented on a card before on this site. There currently aren't any enemies with Revelation: effects in Arkham. But from the rules reference Revelation: effects can be on any encounter card, and On The Hunt spawn the chosen enemy, it doesn't draw it. Which means if they ever do produce enemies with Revelation: effects, On the Hunt will allow you to bypass those if timed correctly. The reason I mention Lord of the Rings LCG is that it does have enemies with "When Revealed:" effects, which are a close analogue of Arkham's Revelation: effects — NarkasisBroon · 1 4/25/18
One of the few cards that shuffle the encounter deck. When you reveal 3 ancient evils with scrying, it grants a chance to shuffle unwanted cards deeper into the enocunter dekc. — Django · 3498 4/30/18
"Once you're out of the study you can head for the basement or attic and dig out the appropriate ghoul to quickly dispatch for XP." Actually the enemy spawns at your location instead of its normal location so you don't need to go to the cellar/attic and suffer 1 damage/horror but rather have it spawn in the hallway. That's really good too. — Éole · 14 5/21/18
No good with a Scrying partner — crymoricus · 209 1/7/19