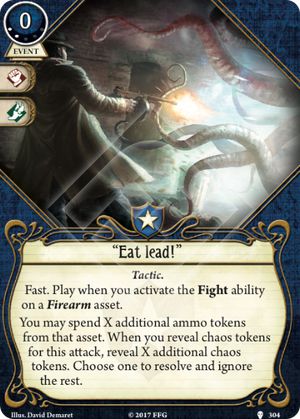 Not the most efficient use of XP. Compare this to Time Warp; both allow you to draw an extra chaos token, but "Eat lead!" only works for Firearm attacks, and forces you to spend ammo on top of that, and has to be played in advance (before you know whether you'll need the extra token or not).

Now, you can get even more tokens from "Eat lead!" if you so desire—but how many tokens do you really need? There’s major diminishing returns here, as each chaos token pulled after the first contributes less and less to your odds of success. Furthermore, ammo is precious. Even spending 1 extra hurts quite a bit, let alone 2 or 3. This really limits the effectiveness of this card with Shotgun or Lightning Gun, since the ammo is just so precious. It's a bit better with the .32 Colt, but I don't think I'd rush out and spend my XP on that.

I’m not saying this card has no place at all. "Worse than Time Warp" is not the same thing as unplayable. A janky Double or Nothing/Shotgun/Extra Ammunition deck is probably pretty excited to see this card. And with Stick to the Plan, for which both Extra Ammunition and "Eat lead!" are valid targets, these elaborate multi-card combos are more achievable than they first appear. But generally speaking, this card isn’t that powerful for 2 XP. That’s disappointing, since Firearms could have used a stronger buff than this.

CaiusDrewart · 2498
The difference between this and Time Warp is that you can draw the same token twice with time warp, since the token you pull goes back in the bag as part of the reset. Your odds are like, 1/34 to do so, but that's a non-zero chance, which this card avoids. — SGPrometheus · 563 3/27/18
Right, you avoid the chance of autofail -> Time Warp -> autofail. But that so statistically unlikely that it has to be a very minor consideration, and surely can't outweigh the many other disadvantages of Eat Lead. — CaiusDrewart · 2498 3/27/18
I just think the ability to literally guarantee an attack is worth 2xp and 1 ammo. In an extremely tense scenario, the difference between "this will hit" and "this will probably hit" is huge. — SGPrometheus · 563 3/27/18
It's an interesting consideration. I agree that psychologically, the difference between guaranteed and very likely feels huge. In terms of maximizing your odds of winning the scenario, the difference cannot be accounted that big. Still, I don't disagree that this is a viable use of 2 XP down the line. Like I said, compared to other cards that pull extra tokens (you could add Grotesque Statue to the list) it's unimpressive. But that doesn't make it awful. — CaiusDrewart · 2498 3/27/18
I think an important consideration for this card is that, unlike Time Warp and Grotesque Statue, Guardians can actually take it. It's unique as a guardian card as it's their only card that provides that "re-draw a token" effect. — SGPrometheus · 563 3/27/18
@SGPrometheus: Certainly a valid point. Perhaps the designers very deliberately didn't want Guardians to get token manipulation effects as strong as those of other classes. — CaiusDrewart · 2498 3/28/18
I feel that's definitely the case. — SGPrometheus · 563 3/28/18
@SGPrometheus: Yeah, we see the designers do that in other areas. E.g. Clarity of Mind is pretty much just worse than First Aid, and Fearless is pretty much just worse than Inspiring Presence. Clearly Guardians are meant to get better healing cards than Mystics do. I guess it's the opposite with extra token effects. — CaiusDrewart · 2498 3/28/18
Getting more chances of drawing an Elder Sign with Zoey firing the colt and avoiding the auto fail is well worth the price, imo. — Freeman · 5 4/4/18
8

Finn handed him another pouch of ammo from a crate labeled STEMWARE. He knew better than to argue with the soldier. And besides, he was pretty sure his deals with the guy in the red gloves were part of the problem.

The smoky velvet kept her peace too. Promises of power had kept her from some awful snake bites, and the tides of fate had turned against them. If the party was suffering bad juju, it was anyone’s guess on how to fix it.

She pointed out the beast from the crystallizer. She had warned the bootlegger that they would be consequences but… Well, her life was mostly consequences at this point.

The creature was completely unharmed, even as the trees around were shattered or leaked a dark gray sap.

A burst of sunshine blazed through the space where the trees once were. A cool breeze came, smelling of huaya.

Finn turned towards Wendy, squinting his eyes. “That’s not your normal necklace.”

A terrifically powerful card, and at the right price. At lower difficulties, this can allow you to auto-succeed a Fight test by spending 2 ammo and pitching (Vicious Blow) or pumping (Physical Training) enough to beat any negative token in the bag. At higher difficulties you can still do this, it just takes more ammo/pump. Additionally, the cost to play is within affordable margins for any non-Zoey Guardian, and the xp cost is super reasonable. The icons are significant as well, since they buff the two ways an investigator deals with enemies (good for evading if the enemy can't be killed), and as a Tactic card, it can be placed beneath Stick to the Plan (although personally I feel there are better options for those precious slots, like Emergency Cache, Ever Vigilant, and Extra Ammunition).

Time for a 'highly practical combo!'

Get yourself a friendly Leo and equip an upgraded 45 Thompson

Slap two sets of Extra ammo in there, and then double that delicious 11 ammo twice with two upgraded Contrabands to shoot up to 44 bullets.

Then, just hold down that trigger and rake 30 resources in from your 7 card, 5 action, 16 cost combo by playing two Eat Leads. Bonus, you get to keep your gun with 12 bullets left on it, and you force two elder sign activations! What a steal!

dezzmont · 17
Sponsored by Cash 'n Guns! — MrGoldbee · 1103 9/6/21
Seems practical! — SGPrometheus · 563 9/6/21
I know right? That is a net gain of 6 actions, as long as you wanted money and don't value cards or actions more than 1 resource. And who would do something silly like that...? — dezzmont · 17 9/8/21
Can X be greater that the amount of chaos tokens in the bag? — Django · 3683 9/9/21
An interesting question that may make this combo even more """"""efficient.""""" I assumed no, both because this combo is, even merely getting you a net gain of 1 action's worth of resources compared to what you put in over the some odd 7 turns you dedicated solely to setting this up, way too powerful, and allowing it to grant you a net gain of 15 actions worth of resources for a whole less card and action to boot! Clearly, enhancing this wonderful, soon to be meta-defining combo any more would be in violation of the grim rule. — dezzmont · 17 9/10/21
2

The extra confidence is totally worth it to me, and you're still left with 2 more ammo to use against some annoying acolyte or ghoul minion. Plus, if you're juicing the BAR to 16 ammo with Contraband (which you absolutely should be), the extra +1 ammo is almost trivial.

micahwedemeyer · 48
It must be addition ammo, so any ammo spent to do the fight command does not play into Eat Lead's ability to reveal more tokens. — DjMiniboss · 38 2/14/19
@djminiboss I almost responded with the same comment, then I realized that he's using 5 for the BAR's fight action plus 1 for Eat Lead to reveal 2 chaos tokens, which, on lower difficulties, can guarantee success. — SGPrometheus · 563 2/15/19
Updated the comment to hopefully make the example clearer. — micahwedemeyer · 48 3/4/19
0

Guardian insurance (and probably the closest they will get to Lucky!). Its fine, but seeing as the "meta" for the game is more or less dominated by Machete, it loses some points. It does have some fine play with the Colt and it will get better if we ever see an upgraded colt that is worthwhile.

Ironically, at the moment this is probably best in Skids as you can throw sleight of handed bullets at your foe (Typewriter or the like) and ensure that your attack will land.

Overall, pretty ho-hum but it will get better if there are a few more firearms put in the game with copious ammo. Until then, I don't think anyone but Skids will take this.

Myriad · 1106
I think you're right about it being strong in a combat-focused Skids deck, especially with the Rogue cards at his disposal. — SGPrometheus · 563 3/27/18
It's hard to fit it in a deck, but it can be really important at times. Its best use is to guarantee a hit with your Shotgun/Lightning Gun + Vicious Blow x2. In such a case, I would be keen on spending one more bullet for a guaranteed hit. Add a Double or Nothing to this combo and that extra bullet spent goes away even more happily. — matt88 · 2319 5/8/18
Machete is taboo'd! — MrGoldbee · 1103 8/14/20
0

Big hitter card. An autofail token can ruin the most assured of hits and this is that tech card you include so that your once-in-a-scenario Double Vicious Blow + Lightning Gun combo assuredly hits.

This latter scenario is probably the most common and useful use of "Eat lead!" in this game, to ensure that those moderately tough "minibosses" die in as few actions and as little risk as possible.