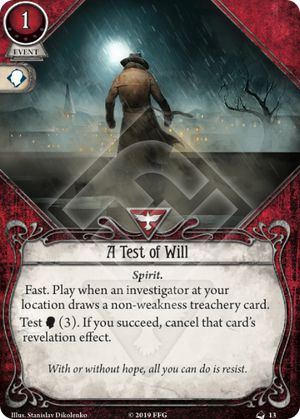 I found one trickly usage of AToW (0). AToW can forcely initiate test even with non-test treachery card; Amanda could commit her signature weakness to avoid a penalty of it. Also, the player window is open during test; Gloria could trigger ability at Alyssa Graham or (taboo) Scroll of Secrets to look next encounter cards. It's helpful when Gloria looks cards in encouner decks and want to discard two encounters. Sadly, both Amanda and Gloria couldn't add this card without Versatile.

I wanted to write something up about this card, because I've left some negative impressions on it in a different review and I want to clarify some things. I still think, for a LOT of investigators, this card is just worse than A Test of Will 1. Let's actually just break all 3 of them down for a second:

A Test of Will - Pay a card and a resource for the chance to cancel a revelation on a treachery.

A Test of Will 1 - Pay a card, a resource, and an experience point (proactively) to cancel a revelation on a treachery.

A Test of Will 2 - Pay a card to cancel a revelation on a treachery, with some chance that you will have to spend 2 XP after the scenario if you want to use it again.

The breakdown for me is pretty simple: most investigators who want this version will want to upgrade to the level 2 version. Investigators who want the level 1 version DO NOT AT ALL want this version or the level 2 version. This is almost centrally an issue of Willpower. Low will investigators can't pass these tests but are still personally crippled by encounter cards (think Preston Fairmont or Tony Morgan or Finn Edwards), and they will therefore take the level 1 version, probably later in the campaign, for some personal defense. Investigators who can consistently pass the will check have high will and are therefore less inclined to needing to cancel a treachery, so this becomes more of a support card at higher counts. Consistently being able to pass the check means that there's not much value in spending the 1 XP to guarantee the check passes, but it may be worth 2 XP for both the 1 resource savings and the insurance it provides you in cancelling one treachery you otherwise would've failed (the 1 XP version might do this if it so happens you purchase it right before the scenario you would have failed the check, but most of the time this wont be true). Obviously, by scenario 8, the level 1 iteration is almost strictly better than the level 2.

I say almost because there's one very easy to overlook side to this card, which is that, unlike Test of Will 1, it offers a test. That matters in Survivor because failing tests often means you get things. If you Take Heart a Test of Will test, you're usually happy regardless if it passes or fails. If you're Stella Clark in particular, Test of Will level 0 basically reads "1 card, 1 resource. On standard: 50/50 you either cancel the treachery or take an extra action this turn (and draw a card probably because Rabbit's Foot)". You could even intentionally Draw Thin to increase the odds of failure and make some extra cash (with DT and Rabbit's Foot, you recoup the cost of Test of Will and make back a resource). Now, this is all a bit less helpful in solo where you're less likely to encounter a treachery that doesn't already have a test most rounds, but in a group setting you could more quickly find a target, letting you either support a teammate, or at least profit for trying. These investigators are probably best off sticking to the level 0 version, as failing is not something you want to gamble 2 XP on.

All of that is to say, I think Test of Will level 0 is a pretty niche card. There are certainly some investigators that could use it for support, but it's very inconsistent support that isn't really recouped even with Rabbit's Foot out. I could see some versions of Agnes Baker or Patrice Hathaway running it as group support, sure. I think Stella Clark is by far the best home for it.

StyxTBeuford · 12744
I've been playing Stella (partnered by Nathaniel) in a TCU runthrough, and I have found this card pretty useful. We are palying in standard, so it isn't hard to boost to success, and there are enough nasty treacheries that willpower doesn't help with (e.g. Fate of All Fools, some of the Hexes) that this card has proved to be a workhorse. I might eventually upgrade to level 2, but I am busy spending XP on "Look What I Found," allies, and similar cards to do that yet. In lower-willpower Survivors, I more or less agree with your analysis, but I don't think this card is bad. — LivefromBenefitSt · 937 9/26/20
Like I said, I think Stella is easily the best home for it, and I agree the card is very good with her. You're happy with either function of the card in her case- action on failure or cancel on success. I think for everyone else it is a lot harder to justify. — StyxTBeuford · 12744 9/26/20
I dunno. There are a lot of 3-4 willpower Survivors, and a lot of them run Peter Silvertre, whose level-2 form gives a static boost. It — LivefromBenefitSt · 937 9/26/20
It's not that hard for a lot of survivoirs to pass a willpower (3) test. I guess a lot depends on how you feel about Exiles, and how much you want to gamble with XP vs blocking a nasty treachery. TL;DR -- I don't think you're wrong, but there is a lot of variation in deck design and risk management; a lot depends on the specific investiagtor/player. — LivefromBenefitSt · 937 9/26/20
Rita, Silas, Calvin, and Wendy are the Survivors I would take Peter 2 with (Yorick wants to recur allies with limited uses, Patrice and Aschan are much better with Labranche). Calvin's an odd choice since the card probably is okay later in a scenario but near useless earlier, even with some trauma and Peter getting in play consistently. Wendy would have 5 will which is really good, but I think her deck is a bit crowded out by more directly impactful events. Rita is just at 4 with very few will icons typically in her deck (usually it's full of combat and agility). Silas would just be at 3 which is nowhere near enough to be consistently worthwhile. I think again Agnes is a potential choice since she actually would also take Peter 2, but Ward 2 is still a MUCH better card for her than any of these. — StyxTBeuford · 12744 9/27/20
Also note that this card can be used on other investigators on your location. I'm pretty sure someone with will 1 or 2 appreciates it if he doesn't lose his hand to diabolic voices. — crayne · 3 9/27/20
Hence why we were discussing it as a support card for people with high will (as treacheries are already less of a problem for them anyway). — StyxTBeuford · 12744 9/27/20
0

About even with Ward of Protection, and we know how often that sees play. You are spared the Horror, but the cancellation isn't certain. Leaving Calvin Wright out of it, only Silas Marsh starts with a below 3, with the Remaining investigators split evenly between 3 and 4, so a (3) test shouldn't be insurmountable for most of the Survivors (and it could save Calvin from a late game Horror Treachery...). I wouldn't say that this is an auto-include, but it's certainly a useful tool in the Survivor toolchest.

I like this card better than A Test of Will (1); I'm not sure the consistency is worth the Exiling, unless you are worried about a specific game-ruining Treachery or are leaning heavily into Exile with Déjà Vu. I think I would feel worse about missing the test on A Test of Will (2) than I would on this version.

Outside Survivor, I doubt Agnes Baker or Marie Lambeau want it (unless they are doing some sort of "shut down the encounter deck" strategy). Finn Edwards and Preston Fairmont surely don't. I suppose William Yorick or Tommy Muldoon could combo it with "Fool me once..." to blank an event and cancel the next instance, too. Minh Thi Phan probably prefers Dr. William T. Maleson or Forewarned. A Tony Morgan too soft-hearted for "You handle this one!" might like this card better.

LivefromBenefitSt · 937
The cancellation requiring a test makes this a notable amount worse than Test of Will 1 or Ward. In either of those cases, you only need one card and a resource to guarantee a cancel. Here you will usually either commit something on top of it, or lose an extra card in addition to the treachery effects. — StyxTBeuford · 12744 9/1/20
I like that this card can be included in a L0 deck but I will take the certainty of the L1 exile version since I mostly play on Hard. I have Pete/Duke up next and would certainly play it with them since I bring a lot of skill cards. I also love playing Yorick and Rita. I would probably play it with them but I don't bring a lot of skill cards and am not sure I can pass the WP test. — TWWaterfalls · 862 9/1/20
One advantage this has over Ward of Protection is that you can use it to cancel anyone's Treachery draw, not just the cardholder's, an effect that only WoP (2) gets. This might make it worth the Willpower test, which (in my opinion) is not that terrible; Survivor is getting Assets with static Willpower boosts. It's not that hard to get Willpower to 5 or 6, which makes this test comfortable on Easy or SDtandard. You make good cases for the attraction of the XP versions of this card, though. I guess I should embrace Exile if I am going to play Survivor. — LivefromBenefitSt · 937 9/1/20
Unless the treachery has Surge, or some other non-revelation effect, A Test of Will (and similar cards) don’t combo with “Fool Me Once...” because it requires some of the card’s effects to resolve - and canceling the revelation treats that effect as never having resolved. — Death by Chocolate · 1258 9/1/20
Realistically though, if you're boosting will that high, who cares about including a card like this? You mostly either get a will test you'd pass anyway, or an enemy that this can't hit. The real advantage is cancelling other people's things, which Ward 2 and Test 1 and 2 do fine enough already. I will say that Test of Will 2 is a lot better than Test of Will 1 if you're in that support camp, but otherwise, if the goal is self protection, take 1 and avoid 0 and 2. — StyxTBeuford · 12744 9/1/20
It depends on the campaign? TDL and TCU have no-test Treacheries that are a pain, and getting rid of Ancient Evils or Spires of Carcosa at the right moment are a huge tempo savings. — LivefromBenefitSt · 937 9/2/20