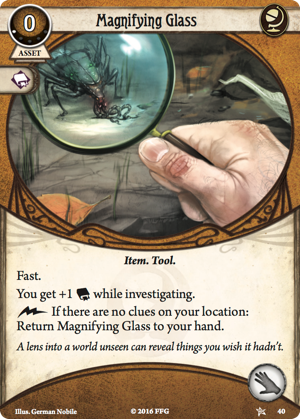 To consider the humble magnifying glass, in this or its level 0 form, one should keep in mind the way in which most act decks progress: the collection and spending of clues. Clues, barring a few tricks of a persuasion, or some exceptional luck, are found through successful investigation actions, using . And the magnifying glass provides a static +1 for those - and only those - actions. As such, it's a lovely card.

In its level 1 form, it costs 0 (a bargain!), can be played without spending an action because it's fast (double bargain!!) and boosts one of the core actions many investigators will be attempting (...triple bargain?!). While not as showy as some of the alternative clue-gathering techniques, such as those outlined above, or as potent as a Flashlight, which can reduce the shroud of some locations to 0, effectively ensuring success on any chaos token but , the magnifying glass is nonetheless reliable and inexhaustible - no charges, no uses, just steady +1 .

There's more: the upgraded version of this card comes with a which allows for quick pocketing of the glass. Given that it's free in resource- and action-cost to play, and then to return to hand, that's quite the boon. Why might one want to do that though? Perhaps hands are getting full and an investigator wants to bring out a gun, sword or book; perhaps there's a big test ahead, such as a parley action, in which you'd prefer to commit the magnifying glass for its icon; perhaps you're worried about being made to discard assets - there are plenty of such effects - and you'd rather hold on to the glass. More than anything else, it provides options: it may take up a hand slot, but it doesn't do so permanently, and if your investigator finds their role in the scenario shifting from combat to clues or vice versa, bingo, out/in comes the magnifying glass. Tip top.

zozo · 2748
Nice review! I hadn't considered the advantage of re-pocketing the Level 1 Magnifying Glass to use for its skill icon. Especially useful if using Scavenging--say, in a Rex Murphy deck--which can recycle it for either its icon or as a fast, 0-cost asset. — Herumen · 1652 3/10/17
6

For Lola, the effect here allows you remain in Yellow, without the risk of Crisis of Identity forcing you to discard the Mag Glass. (By returning it to you hand and replaying it each turn you need to). This is good for three reasons, firstly Lola likes passive buffs (that still work when you switch colour), which the Mag Glass is - ie, Mag Glass is generally a good card for her. Secondly Higher Education is a great card that Lola can run, and ending the turn in Yellow so that Higher Education is up for the Mythos phase is a good state to be in. Lastly Lola decks are generally better at the clue side of things than the fighting, so you're probably going to want to pick Yellow as one of your colours anyway.

And, sure, it's good for other investigators too. But so is the Level0 version. Lola wants the upgrade.

Earlier, otherwise sound reviews did not mention good synergy with Higher Education and a good insurance against some seeker weaknesses . You should generally almost always take it on your hand if you can. Daisy Walker has it's The Necronomicon, Minh Thi Phan also likes to read, e.g. The King in Yellow. So you always need a free hand slot in case you'll all of a sudden feel an unresistable urge to read something spooky.

And about Higher Education? Well, imagine you're on 3 cards at the end of a turn. First, hide the glass to your pocket. Then draw the card at the end of the round. You're on 5. Then move to a location where you'd like to investigate. Bump your with resource, drop the glass as a fast action. Profit.

Onetribe · 281
It's also nice to return to your hand if you have Dream-Enhancing Serum out. Maybe you draw your copy during upkeep and can exhaust the Serum to draw another card. If not, just play it again in the next turn. — Miroque · 21 12/18/21
0

I thought if it could be possible to put It on the Backpack, and after used return It to the pack again? The cards at the Backpack can be used "as if they were in your hand.... What do you think? Is it correct?

Agonistes · 1
You can play the mag glass from the backpack no problem, but there is no way to put it back in the backpack after you've pulled it out once. The backpack is not your hand. Also, cards in the backpack can be *played* as if they were in your hand, not "used". There is a difference. — TheNameWasTaken · 3 3/10/21
(the difference being, to be clear, that you can't commit cards attached to backpack to a test, or discard them when a card effect tells you to discard cards from hand, etc) — Thatwasademo · 44 3/11/21