Stephen Somers
Weaver of the Cosmos #327. 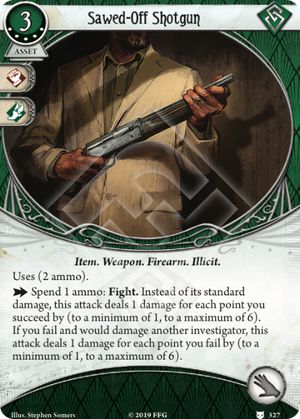 This is a really good target for your Three Aces success. If you are running a Three Aces Rogue deck anyway, and are also wanting to get in on some damage, I would recommend going for this as a combo piece to that.

The lack of combat boost really limits this card, especially on hard or expert level. If the original Shotgun is also an option, it is usually better, as in comparison it gives +3 twice for only 2 resources more. The sawed-off is only better if you can succeed by 6, which is very difficult indeed for most enemies that you might want a big weapon to fight. For s without access to cards, all but perhaps the most buffed Tony Morgan would prefer Chicago Typewriter and .45 Thompson over the sawed-off, both also capable of dealing 12 damage but much more likely to do so.

jmmeye3 · 554
you're forgetting that Sure Gamble exists and can all but guarantee hitting at 6. — Difrakt · 1048 2/9/20
Rogues have access to a lot more skill bumps than other classes. I don't think the lack of a +3 is going to hurt. — Calprinicus · 3163 2/15/20
I agree. The card would be challenging to pull off for a Guardian, but Rogue's are tricky. Although, if you have the Sawed Off and you don't have Sure Gamble or something similar, you may be waiting around until you can set up the shot. Conversely, getting a shot off with the regular Shotgun is easy enough for Guardians who have combat icons up to wazoo. — LaRoix · 1496 4/27/20
I just noticed this unexpectedly a one-handed weapon. That does make a little better! — jmmeye3 · 554 6/14/20
With Sharpshooter (in the Winifred Habbamock pack), the attack now tests agility and you can boost it with Streetwise, Cunning, Manual dexterity, ... — AlexP · 171 8/15/20
Another interesting point about the sawed-off is that you sleight of hand this out if you're playing with the taboo list. It also won't compete with Lockpicks, for instance. — Zinjanthropus · 176 8/20/20
Yes, I’m coming around to the sawed off. The fact that it one takes one hand slot helps it fill a really nice overachieving role. My review was published before it was clear that it was one-handed, which does make a big difference! Also, my comparison with Shotgun is a moot point because I don’t think any investigator could choose either of these (only one is going to be an option) — jmmeye3 · 554 9/1/20