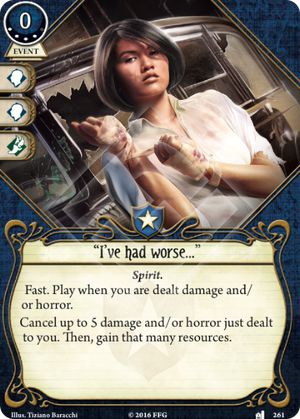 This card has 3 main advantages: (1) The encounter has a harder time playing around it because it's fast. (2) it can be used to get resources from damage. (3) it doesn't cost anything to use as protection.

All of these combine to make it better than Plascrete.

edrof55 · 18
What's plascrete? Google tells me it's some kind of armor from netrunner. — Django · 3436 9/22/17
@Django Yes, it was very commonly used against a certain kind of deck archetype that was very effective at killing the runner :) — Shiro1981 · 1 11/20/17
@Django Adding onto what Shiro said, the joke is on the fact that this card has the same name as a netrunner card that counteracts damage. So he's pretending he's reviewing netrunner's I've Had Worse and comparing it to Plascrete. I thought it was pretty clever. — youngoli · 1 5/19/18
4

I always like cards that have multiple effects. For that reason (and more), I'm a fan of "I've had worse…". For 0-cost & no actions, it lets you cancel up to 5 damage/horror and gain that many resources.

Its first effect makes it a good upgrade from Dodge. Like Dodge, it is Fast and will work against Elite & non-Elite enemies alike. Unlike Dodge, which cancels all effects of an attack against any investigator at your location, "I've had worse…" only cancels damage/horror--not other effects that an enemy attack may have--dealt to you, not other investigators. However, "I've had worse…" can cancel damage/horror from other sources, like treacheries, locations, etc.--not just enemies. It also costs 1 less resource than Dodge and provides 1 additional icon. So, if not needed for its effects, it can provide 2 to those all-important treachery tests.

Its second effect provides resources for a class that currently (as of The Path to Carcosa) has few options other than Emergency Cache for resource generation. [Stand Together is another option, but is only effective in multi-player.] When used against an attack from an enemy that inflicts 2-damage & 2 horror (probably the most likely scenario), "I've had worse…" can provide 4 resources toward playing that Shotgun or Lightning Gun or for Dynamite Blast.

The big question: Is all this worth 4XP? In solo play, I would say "Yes, indeed!" In multi-player, I'm more likely to upgrade to Stand Together, which costs 1XP less, provides a similar 4 resources, as well as 4 cards, and needn't be held until facing a large enemy. In solo, though, this is often one of the first cards I'll upgrade to when playing a Guardian investigator--even Zoey Samaras--mostly because, when played wisely, it can give you a Fast influx of 4-5 resources to set up play of your big weapon. That said, you will want to hold "I've had worse…" until it can be used against an enemy (or other source of damage/horror) that maximizes its resource gain. But then, Guardians are usually seeking out danger.

So, in summation: 0-cost, Fast, 3 skill icons, cancels damage/horror, provides resources. What's not to like about "I've had worse…"? Its only real drawback is its high XP cost. But, given all it does, I'd say it's well worth it. Though, as they say, your mileage may differ.