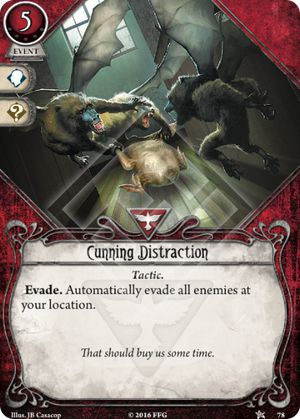 Cunning Distraction is more often included thanks to it's awesome artwork and the icons than for the ability it provides. Cunning Distraction causes all enemies at your location to be evaded and therefore exhausted, even Elite foes, without drawing a token from the chaos bag. This has a number of benefits. Now that enemies are exhausted, they can't take attacks of opportunity, they can't retaliate, they can't move during the enemy phase (if a Hunter), and they can't attack during the enemy phase. They also won't follow you if you want to move. Everyone gets this benefit. If you and/or a partner is swarmed with enemies, Cunning Distraction is a great get out of jail free card. The enemies will of course ready during the Upkeep phase, this buys you some time. But there is a rub in it.

How likely are you and your fellow investigators assembled at one spot and overrun by enemies at the same time?

How likely is it that you are at a location with three or more enemies at once?

No question, you can play the event when fewer foes pressure you, but five resources seem a steep investment for the short respite you are rewarded with. If you plan to use it against the big baddies, be warned, though: some of them have forced abilities that readies them prior to the Enemy phase; causing them to wallop investigators none-the-less!