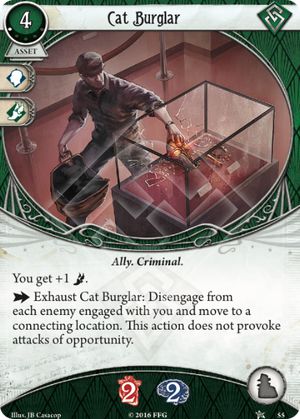 So, here we are in the Forgotten Age cycle, nobody has yet reviewed Cat Burglar. He must be useless, right? I mean, look at his abilities - adds to your Agility, but then lets you avoid having to make Evade actions. That is contradictory. 4 Resources seems expensive. And, worst - if you can take Cat Burglar, you could also take Leo De Luca, one of the finest allies in the game.

And yet - he is fantastic. Testless disengage and move, against multiple enemies. Yes, Leo Anderson can runaway like a little girl despite his appalling agility. Even agile investigators like "Skids" O'Toole or Wendy Adams can benefit. Surrounded by lots of enemies? Can't evade them all? Hit Cat Burglar and get the hell outta there.

Consider the card Elusive, which is generally considered as pretty strong. Elusive has advantages in being fast, cheaper, and can take you to any revealed location with no enemies. However, Cat Burglar can do any connecting location - even unrevealed and and occupied - and you get this every turn.

On top of this, you get an agility bonus. Wendy can beef up her for those funny events. Backstab, with added criminality. And a 2/2 damage soak. Suddenly, it doesn't seem so expensive.

So, why don't we see more Cat Burglar in play? Well, I think this is 'cos he's in the same faction as Leo De Luca. More actions is very powerful, and against Leo De Luca, I just don't think the Cat Burglar stacks up, even in an evasion-heavy (so far) cycle like Forgotten Age. If you're trying to just move, or investigate, or play a card, Cat Burglar doesn't do anything for you, while Leo De Luca does.

However ... Charisma is a thing. You can play them both, and enjoy being able to just move away from any enemies, and still have 3 actions. I've done this in a few decks - "Skids" O'Toole and Jenny Barnes - and it just allows you to slip past enemies. It's very powerful against Brood of Yog-Sothoth in Undimensioned and Unseen, and in my opinion, pretty much breaks The Organist.

And for Leo Anderson, Cat Burglar seems a strong pick - giving him alternatives to just killing things. Moreover, Cat Burglar is non-unique; he could have 2. Need to run away from the Harbinger of Valusia? Cat Burglar is your friend.

So not, perhaps, your first-choice ally - but an excellent secondary one with some awesome uses when enemies start to mount up and it's time to bravely run away.

AndyB · 908
Yes, a very strong card. It would help if there were more cards (like Lockpicks) that let you leverage Agility to do other things than just escape from monsters. We'll probably see more of that down the line. But even as things are Cat Burglar is useful. — CaiusDrewart · 2816 7/17/18
Evading enemies is a 2 edged sword... I've played a speed based character in a 4 player game (no fight option) and it wasn't very pleasent. I've lost at least 2-3 turns keeping enemies busy, until our fighter could take care of them. However in FA i guess it's a better to evade or you'll gain lots of vengeance points, so there the cat burglar shines. — Django · 4434 7/17/18
Another disadvantage about him, he does not exhaust enemies. So hunters will come after you and attack. — Django · 4434 7/19/18
Yes, you do have to move further away from hunters, so they can't just hunt straight after you. And I don't think a speed-based character works so well in 4 player games either; fewer places to escape to, and they can't all keep up. — AndyB · 908 7/19/18
While I agree that De Luca is better, unfortunately there is almost always someone else using him. Two of my 4 player party use Cat Burglar and I can honestly say that we would have failed our Carnevale run if it wasn't for them. While he may not be the best ally he is certainly one of my favorites. — BobSov · 1 8/17/18
If only his ability could be activated with Finn Edward's free evade action... — Runic · 1 9/24/18
I wonder, do you have to be engaged with enemies to activate his move ability? Maybe you just disengage with the 0 enemies engaged with you and move. This makes is a free move action every turn, which makes him just like Leo except your extra action must be a move. — lockque · 1 6/23/20
As he takes an action to activate, you are not really getting an extra action @lockque — fran · 1 7/12/20
you could maybe get more out of [Haste](https://arkhamdb.com/card/06239) — zarathustra · 1 3/11/21
This guy on Edge of the Earth - especially last scenario - is killer — Krysmopompas · 298 9/17/22