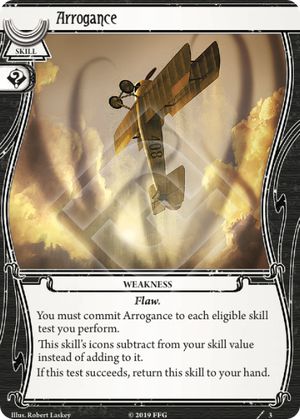 One of the least harmful investigator weaknesses in the game, if not the least harmful. It's comparable to Rex's Curse in that it only causes you to fail one test before you get rid of it. Two big differences though:

The only real annoyance is with all the "Succeed by X" cards, but that's a minor issue really. One Willpower test in the Mythos phase (which are plentiful) and you're already free from Arrogance. I really feel like they forget a sentence where it is shuffled back into your deck after getting rid of it (similar to Rex's Curse). Also would make it hurt more because Winifred Habbamock inherently draws a lot, making her lose valuable draws in the process.

UPDATE 17/09/2020: Fun interaction: while you must commit Arrogance to each skill test YOU perform, nothing prevents you from commiting it to other Investigators' skill tests. Have Stella in your team and this card literally becomes a joke.

Nenananas · 214
If it shuffled back in, Wini would have quickly dropped from being one of the best Rogues to one of the worst. It’s tame, but it’s not like because it’s so tame it makes Wini brokenly powerful. — StyxTBeuford · 12725 9/2/20
I agree that it is quite tame. The effect of this card is similar to Haunted, except you need to fail a test instead of using two actions to clear it; failing a test is usually easier IMO. — iceysnowman · 157 9/2/20
I would also add that I've run into many situations where I could continue to succeed-by whatever even with arrogance in hand for turns at a time (until drawing an autofail). -1 doesn't make that much of a difference if you're commiting like 3 or 4 cards to every test anyway. It is annoying the way that it clutters up your hand, though. — Zinjanthropus · 208 9/2/20
Investigators with low willpower intentionally get weak weaknesses since they're at the mercy of every other thing in the game that test willpower, like the encounter deck. — toastsushi · 62 9/2/20
I hadn’t put that together, you might be on to something. That said, Wini suffers from her 1 will less than even some 2 will gators. Just by virtue of how you build her deck, will tests are not entirely forgone. — StyxTBeuford · 12725 9/3/20
Good point @StyxTBeuford, although I do believe an investigator with as much power potetional as Wini deserves a harsher weakness than what she got, but I agree that shuffling back into the deck might be a bit too harsh. @toastsushi very interesting, I hadn't thought about it like that, although I do think Finn's Caught Red-handed is quite harmful. — Nenananas · 214 9/3/20
0

So, I would say that this is kind of a mild weakness. Sure it's annoying, it just keeps coming back! But, it's not too hard to get rid of it. Just commit it to a test that you know you're going to fail anyway (It's pretty hard to succeed with a modified stat of 0). Conversely, if you've already got a full hand and a couple Pickpocketing (2) or Lucky Cigarette Case in play, just ignore it, and continue to succeed by 2 anyway. Eventually you'll draw an which will hurt your tempo, for sure, but at least you no longer have to worry about Arrogance. That is, until you inevitably cycle your deck again.

That's been my experience with this, so far, anyway.

Zinjanthropus · 208
I can see this being pretty annoying if it causes you to continue succeeding by 1 all the time, but it does seem like it's just annoying rather than devastating. — SGPrometheus · 640 8/30/20
0

Everyone seems to think that this is a weak-ass weakness, and everyone is right. Looking at the two elements, the effect and the discard condition, we get:

The effect: Winifred gets a -1 to all tests until she fails one. This might mess up some "succeed by 2 cards, but Winifred tends to over commit something fierce.

The discard condition: Fail a test with this committed.

All in all, this is a way below average signature weakness, maybe the weakest in the game. It's not all that likely to hurt her success, and every Arkham investigator fails now and again. It's pretty hard to imagine a less impactful signature weakness, a mere roadbump on the way to whatever Winifred wants to do.

LivefromBenefitSt · 907
There's no need to imagine a less impactful signature weakness when Whispers from the Deep exists. — suika · 8615 4/26/21
Commit it to your friendly survivor so they fail even on elder sign and fail by more to search farther with rabbits foot upgade? — Django · 4192 4/26/21
I've never played Amanda, so I can't speak to that. However, my play partner ran her in our recent RttFA game, and he found it "annoying." I've never found Arrogance more than a "nuisance." Anyway, the scale doesn't go below "Way Below Average," so it's kind of moot. — LivefromBenefitSt · 907 4/26/21
Django, I am doing a facepalm. It never occurred to me that I could commit a signiture weakness to someone else's action. In fairness, I was running Lone Wolf, so I was very rarely in the same location as the other investigator, but it's a clever idea, especially with Survivors. — LivefromBenefitSt · 907 4/26/21
@suika Since they errata'd (not taboo'd, errata'd) Amanda's reaction ability to a Forced ability, Whispers is now extremely annoying. It's basically this, but your stats are 2s and it doesn't go away until next round no matter what. — SGPrometheus · 640 4/26/21
@SGPrometheus Amanda can get rid of it exactly the same way Winifred can (commit to literally any test or someone elses's test) except easier (no need to fail) and her signature directly counters it... — suika · 8615 4/26/21
I hadn't considered that you could commit whispers before it goes underneath Amanda. You're right; as long as you don't get Whispers in your draw at the start of the round, you can just pitch it beforehand. — SGPrometheus · 640 4/27/21
Although 9 months past due, you can also use Amanda's signature asset to swap out whispers and then blow it. I would argue this weakness is only slightly more harmful. — drjones87 · 63 2/6/22