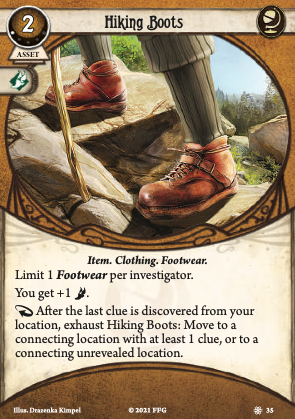 Super cool card! Some will complain about the lack of introduction of a Foot Slot, but besides that, let's see how it compares to its most obvious competitor:

• Cannot be tapped, someone needs to empty a location (could be another investigator)

• Can only bring you to a location with a clue or unrevealed.

I personally love this card, emptying locations as the main clue-getter is what you do, and any free move is one action that you can dedicate to investigating, therefore gaining tempo.

As good synergies, we can also add:

• Well... Pathfinder for a lot of free moves

• All the "As if" investigating shenanigans:

•• If you use cards like the Pocket Telescope, In the Know, Sixth Sense, Seeking Answers, or Luke Robinson, you could potentially move to the location connected to the target, allowing you to cover greater distances.This also works with Pathfinder as you can use the window during the test to move at the location of the test (see the Shortcut FAQ on ArkhamDB).

So, knowing that I love the theme, would I choose the Boots over Pathfinder?

I plan on upgrading to Gené Beauregard at some point (not necessary but good).

I have fear of heights

The space in my Deck is too hard to find

I already have too many Assets and I would never find the time to play this lesser priority one.

For example, a level like Echoes of the Past has a strip of (mostly) clueless locations across the middle, with clue-filled locations to each side of them. So you can't get rid of the no clues in the middle to move to the unrevealed or clued locations, and once you get rid of the clues on those locations you realise you can't move back to the now-revealed locations without clues either. Barring some shenanigans with Mr. Peabody, this makes it very hard to get even a single move from the shoes across the entire scenario. This is an extreme case, but can expand out to a lot of the campaign. The Last King is similar in its map that needs to be moved through a lot that begins with almost no clues. For The Unspeakable Oath, they're unlikely to help with the necessary back-tracking in that level, unless you leave clues behind, in which case they didn't give you any mobility early - this is their main problem in any level that does require back-tracking, which most of the rest of Carcosa does. In Dim Carcosa the has the unfortunate effect of not leaving a window to flip your location after you drain it of clues, so you either need to leave a friend there, or, in solo, go back there anyway, negating the actual advantage to the move.

Similarly, The Forgotten Age and its explore mechanic mean you will usually move due to the explore, often after getting the clues from the location you're on to begin with - something that's necessitated in a couple of the levels. On those levels, it's very hard to get movement from at all. On the others, it means exploring early and leaving clues scattered is a more viable strategy, and it does open up the board more which can be good. Or bad, sometimes.

Of course, there are plenty of levels where the shoes aren't really hard to get value from at all. I do think they work a lot better on the expansive maps of Innsmouth, for example. But I was very surprised at how limiting the move's requirements could really be, and just wanted to point that out.

So over all, I think the movement ability itself is less consistent than even the test on Track Shoes, and certainly isn't the Pathfinder replacement I initially thought it might be. That said, it has its upsides. Having the item trait means it interacts with a number of abilities, including William Webb, can easily be traded around, or discounted. It also gives a stat upgrade, which is certainly significant, and probably worth a slot for anyone who actually wants to make use of . It's build-depenant of course, but the people who most likely want to use that stat are the people who also like either movement or to leave clues scattered around the map, Ursula Downs, Monterey Jack and Trish Scarborough, who it was the obvious fit for anyway.

You can set up the free move on purpose, with cards like Gené Beauregard and Vantage Point to manage where clues go, or you can rely on good knowledge of how the scenario works to glide around and get out of trouble by your own strength sometimes.

Note the cool feature that the benefit trigger is not personal, a buddy can finish what you start and give you that speed boost. It's not keyed to being unengaged.

Tsuruki23 · 2350
After they tabooed Pathfinder I did not expect Seeker's to get another permanent asset that gives out lots of free moves so soon. — OrionJA · 1 9/27/21