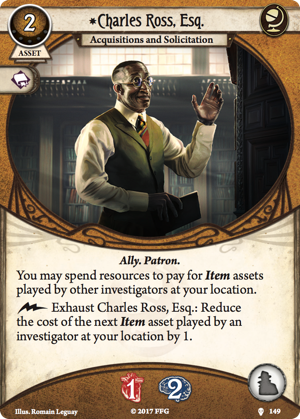 Q: How does Charles Ross, Esq. work? The card doesn't explicitly states its time window. Can you use its ability then in the next round use up the cost reduction? Maybe even use it twice before playing an item? It using at your location, does it mean your location when you use the ability, or when you play the item (if you use the ability and then move, where can you play an item at reduced cost)?

A: Correct; Charles Ross’s ability applies until it is used, so if you use it in one round you will still get the discount next round, and if you use him more than once before playing a card, you would get a –2 discount. As for your second question, if you move after using Charles Ross’s ability, the discount would apply to the next Item asset played by an investigator at your new location, not the former location.

So basically you can get one additional resource from it per round. Awesome for a 2 resource card!

vidinufi · 57
While I appreciate the templating consistency this is nightmarish from a book keeping perspective. Hopefully they avoid stuff like this in the future in favor of a reaction ability. — Difrakt · 1180 6/20/18
Huh, I had no idea you could use this guy multiple times to reduce the cost of an item multiple times. That makes him much stronger (although still probably weaker than Milan, who will get you much more than 1 resource per round.) — CaiusDrewart · 2816 6/21/18
@difrakt You're correct about it being annoying to keep track of, but why not just put a resource on him every time you use his ability? Obviously it's not exactly what the card says to do, but I'm not going to make things harder on myself just because the card didn't tell me not to. I did a similar thing while playing Minh; I used clue tokens to keep track of who I'd given my wild icons that round and it helped a lot. — SGPrometheus · 688 6/22/18
I put a dice on him to count cost reduction. — Django · 4434 6/22/18
Yeah, this should have added resources to him, and then the text "use resources on Charles to pay for item assets played at your location." — PureFlight · 710 2/22/19
The reason for the weird templating is that Charles was not intended to stack like he does. In the end though they decided to let it work rather than errata it. — HolySorcerer · 1 3/9/19
Well it is not yet as good as "use resources on Charles to pay for items", because you have to empty his ressources at the next played item. For example if Yorrick wants to recycle his teddy bear at your location, I think you would lose Charles' ressources. — AlexSand · 40 3/16/19
A good card if you have a teammate running Dark Horse — dlikos · 81 4/18/20
How does this work if he's discarded, does the effect continue until used? — Spagbol · 1 6/12/21
2

The discount build-up feature ( once per turn without playing any Item yet) works well when you are playing with firearm-based teammate. While the fighter is using the ammo of their current gun, at the same time you save up the discount for the fighter's next gun, possibly reduced to 0 if enough turns passed. Sometimes when I use Dr. Milan Christopher and continue to get +1 resource every turn yet it cannot help the fighter take the heat off me, I think Charles Ross, Esq. is a great alternative.

I see good synergy with Bob Jenkins. Somebody else plays Bob who then plays your items (or somebody elses) and Charles pays for the stuff.

Take him yourself using 1 / 2 Versatile do get some other class items and more rogue-zeros. Or let somebody else take Charles Ross, Esq..

Now, how does this work on Lola? If she is not in seeker role, would the discounts built up prior still usable/apply later? Or does it only apply on seeker/neutral items when she is a seeker?

Stretching it further, what if Ross is defeated/replaced (on Lola, or any investigator)? Would the discount built up still apply? Likely not, but if it does it would be really good, especially for Lola whose Ross easily dies to COI.

petercheungjr · 1
Since it's not an effect that you activate or trigger, I'm pretty sure she gets his discount no matter what role you're in. As for your other question, the discount only exists when he's in play generating it. There's no text indicating that he can affect the game from an out-of-play zone. — SGPrometheus · 688 5/4/20
I don't think it works with Lola. I think she would need to be in Seeker to take the Exhaust trigger. It would be the same as Beat Cop (one damage to an enemy at your location) imo and I doubt Lola can exhaust him to gain that damage. — TWWaterfalls · 862 5/4/20
@TWWaterfalls, the op is asking about the scenario where they are a seeker, use Charles Ross' free triggered ability, then change to, say, Guardian and play a Guardian item. Is it discounted because Charles Ross was triggered by Lola the Seeker. For my 2 cents I think it works. — NarkasisBroon · 10 5/4/20
To complete my response I think SGPrometheus is correct on all counts. Except that his name seems to reference and inferior deathtrap of a starship, and should clearly be SGDaedalus — NarkasisBroon · 10 5/4/20
Yes, I agree with that. I wasn't thinking that far ahead. — TWWaterfalls · 862 5/4/20
@NarkasisBroon I'm really just a fan of Greek mythology, but I get that a lot. — SGPrometheus · 688 5/4/20