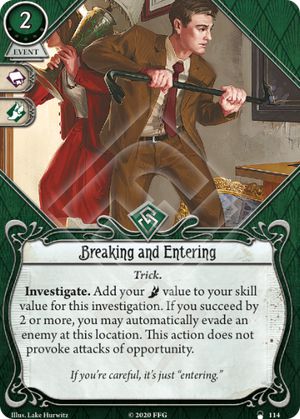 Breaking and Entering, an interesting card. Consider this:

Some nice action compression - it’s combining an investigate and an evade into one almost guaranteed action. Though if you are the clue-finder, this one use card can’t be your only means of discovering clues.

If an (elite) enemy is guarding a location with multiple clues, play this card to: auto-evade the enemy, make a start on gathering the clues (without tanking an Attack of Opportunity) and ensuring that further investigation checks don’t provoke AoO’s. During the Enemy Phase, the evaded enemy can do nothing - only ready and re-engage you in the Upkeep Phase. In the second round, you can evade the enemy normally (making card draw and/or resources off of the success if you have the relevant cards) and skip out of the location towards the next bundle of clues.

While not ideal, it can still be used on a location with no clues to essentially supercharge an evasion attempt. This is useful if the Shroud value is lower than the enemy’s evade value or if the enemy has the Alert keyword. Do bear in mind that a failed investigate check will activate the Haunted keyword on locations in TCU (currently the only relevant cycle).

Activates typical Rogue “succeeds by” mechanics, (though Pickpocketing will only trigger the base reaction, not the succeed by 2 reaction, as you still have evaded an enemy but without the associated skill test) as well as other investigator abilities that care about evading an enemy.

Can be combined with Chuck Fergus to make it fast, free or give a likely unnecessary boost to the skill test.

TLDR; A one use Lockpicks supply and an upgraded Stray Cat, all rolled into a reasonably affordable, level 0 Rogue event card.

RollanPyro · 90
One more card for my Jenny and Alice Luxley deck. Fantastic — TWWaterfalls · 862 11/21/20
Ths card can save your butt against a certain boss, who has the (potential) ability to treat all tokens of -1 or better as autofails, if you fight or evade him. — Susumu · 271 3/6/21
Unfortunately you're not "turning off" Aloof and setting up an attack by evading an Aloof enemy, because they can only be attacked when they're engaged with an investigator. — Pinchers · 104 5/29/21
Kymani finds this card very useful — Amante · 4 7/14/22
6

So this isn't in the same vein as Seeker or Guardian cards that let you cheat 2+ clues at a location. But!

How often have you been playing as the Rogue and you need clues AND evade the enemy both? Well, I play exclusively two-handed, and in two-investigator games, this seems absolutely amazing.

Encounter deck got you bogged down? -- No worries, play this; many rogues aim to succeed by 2 or more anyway -- the upside is fantastic, saving actions!

INT and AGI icons are just gravy, the 2 cost is reasonable; I think I'll be trying this very soon.

fiatluxia · 52
I also see does not provoke attack of oppertunity tided to an investigate action as something I like alot, and I think trish agrees with me. — Zerogrim · 262 11/9/20
Yes, the fact you can avoid AoO makes this card way stronger! — fiatluxia · 52 11/9/20
Yes, Trish loves this card. Since the enemy is automatically evaded, she can just use her ability to grab an extra clue. — eapfel · 5 11/9/20
5

The thing that makes this card good is how frequently you want to play it. The central reason you want to evade enemies is so that you can clear clues off locations without having to deal with them, either leaving them to your Guardian or walking away from them entirely. This card does the thing that makes the game progress while effortlessly avoiding the things that stop the game from progressing and mitigating the risk that it all goes sour. Technically it's barely an extra action for 2 resources, but practically it's a stunningly powerful card for seeker rogues and will rarely not impress.

Really interesting in The Circle undone: with an investigation action you can evade a Witch enemy and then all the investigators at your location can automatically discard their Hex treacheries. Even better in The Secret name !