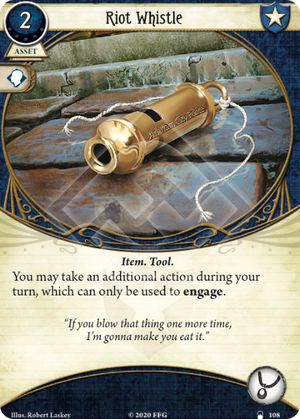 This seemed underwhelming at first, especially since Zoey Samaras, who should benefit from this the most, finds it competing with her signature, and Relic Hunter feels like a heavy investment for something like this. But the more I think about it, the better it seems. Any turn where you make an engage action is one you'll be fighting, and any turn you're fighting will likely benefit from one more fight action, whether it's just in case you miss on the first, or whether the target needs multiple fights to take care of. Even if you don't end up using the spare action to fight, it can get a resource or a draw.

Inside of Zoey Samaras, it might be worth picking with intentions to upgrade to Relic Hunter - with it and her cross in play, not only can any one health enemy be killed instantly, any one health aloof enemy can be killed without tests or real actions.

Outside of her, there aren't many Guardian cards competing for the accessory slot. Hallowed Mirror is nice, but can only be taken at 1 copy, so is less likely to be drawn, and can be used up and replaced by any other accessories you might be using. Empty Vessel is similarly limited, and costs a significant chunk of XP. Unlike the mirror, it stays in play, though. Police Badge is also not a level 0 card, but it can be discarded for the whistle if you draw it, though I'm not sure what kind of situations that would be good in.

As a cross-class option it's less appealing - Mystics, and Innsmouth's own Sister Mary prefer their -boosting accessories, Survivors have cheap sanity soak that Yorick and Tommy really don't want to lose, and Seekers have plenty of good options, though Roland and Joe might give the whistle a look, depending on the build. It's probably worth looking at for people with a Rogue/Guardian pool, though - it can save a shot on a Colt Vest Pocket, or add a resource to a Pay Day turn, for instance.

Overall, I'd say it has most use in Zoey Samaras (alongside her cross), Mark Harrigan (alongside his mirror), and "Skids" O'Toole or Leo Anderson.

SSW · 190
It's much more useful in scenarios where there are a lot of aloof enemies -- PTC and TCU come to mind as having more than their share. — LivefromBenefitSt · 937 11/9/20
It's most useful for Zoe but competes with her signature card. It's most flavorful for Tommy, but it can't compete with his teddy bear. If it didn't require an accessory slot it would be good enough for many 'gators to consider including it. Seems like another near-miss of a card to me. Instead of being a good pick for many, they nerfed it into a very situational or build around pick for a few. — KillerShrike · 1 11/20/20
If Zoey Samaras equip Riot Whistle and use Spectral Razor. Can it use Riot Whistle's action? — LuckyCat · 1 11/23/20
@LuckyCat No, spectral razor is a fight action, the engage is just a consequence of the fight. You can tell what actions a card falls under by looking at what words are bolded in the card text. — gp0923 · 1 11/28/20
with Edge of the Earth out now, I think Riot Whistle goes super well in Daniela builds - get an extra moment to pull an enemy off another investigator or counter Aloof-ness, have it swing at you, and watch it regret the crackback on your next turn when you whip out your Wrench. — supertoasty · 32 5/9/22
I could see a Kymani build that goes all in on enemy management using this. — Amante · 4 8/9/22
5

Oh my goodness I love this card.

Getting a free action to engage doesn't seem like much on its face, but for dedicated Guardians in 3-4 player games it's amazing I ever played without it.

Daniela loves this to get enemies on her for the enemy phase, Zoey loves the free money, anyone with big weapons enjoys not killing their teammates, it trivializes aloof enemies, Skids can engage/evade/get even more actions, and when so much of your game is just taking enemies, getting an extra action means more cards or resources.

Honestly one of my favorite Guardian cards.

DavidRyanAndersson · 50
One of the few extra actions guardians can get. Very helpful indeed. — Django · 4434 1/5/22
The biggest reason why I do not use this card is because of the way too contested slot... This card reads as 3xp, as it will very often come with Relic Hunter. Zoey has her cross, Daniella and Mark the Hollowed Mirror, Tommy & William the Cherished Keepsake, Leo and maybe Skid the Lucky Cigarette Case, Diana, Sister Mary and Lily the Holy Rosary... This leaves NathCho (probably the best user of this card), Roland/Joe but not sure they have the space for this in their 30 cards. I think that this would have been an amazing card if it was released earlier, like Dunwich, but now the competition for this slot is too big. — Valentin1331 · 25312 1/7/22
2

A dedicated fighter in a 4-player multiplayer game might be putting in 3-5 engages in a scenario. If you're playing Machete as your main weapon then you'll want to engage even more often, and certain campaigns are just lousy with Aloof.

For these specific circumstances, a Riot Whistle goes from being one of the worst assets in the game, to an action generating "meta-call", heck, you might just even play it as a 1-off.

P.S. Dont look at this and look at Zoey and go "Hurrr, durr, both cards have word "engage"!". These cards have pretty much no innate synergy if you're not fulfilling the prerequisites I mentioned above.

Tsuruki23 · 2350
If not for the accessory slot requirement this would be an autoinclude on par with Safeguard in a high player count game, especially at harder difficulties. The chance of hitting your allies when you draw a -6 or -8 means you almost always want to engage before fighting. — suika · 8839 4/5/21
Pair it with Hiding Space. — MrGoldbee · 1315 4/5/21
For fighters, I really try to avoid taking Engage actions outside of Flamethrower builds. That said, I do think this looks pretty tempting in a Flamethrower build. I'll at least try it. — CaiusDrewart · 2816 4/6/21
I agree with suika that the accessory slot requirement is a big deal. Hallowed Mirror is one of the best Guardian cards.. — CaiusDrewart · 2816 4/6/21
A final thought: somewhat counterintuitively, in multiplayer engage actions are more important for evaders than fighters in this game, because you have to be engaged to an enemy to evade it. (This is one reason why I hate playing dedicated evaders in multiplayer.) Not that there are a lot of Guardians who want to evade, or evaders with access to this card, but something to keep in mind as new investigators come along. — CaiusDrewart · 2816 4/6/21
OK, final final thought. I think this card has some real synergy with Zoey. Let's say you're in the common situation where Engaging an enemy you'll going to Fight would basically just be insurance against the autofail. In that situation, it's very often correct to just risk it and not engage. So if you have a Riot Whistle in play, in that situation for most Guardians the free engage is saving you a small chance of hurting a teammate. So, pretty minor. But Zoey also picks up a resource here. In other words, this card will allow you to take a lot of "low value" engage actions you wouldn't have otherwise had time for, and Zoey likes that since she gets paid for it. — CaiusDrewart · 2816 4/6/21
That said, the accessory slot clash with her Cross is a big deal, sadly. — CaiusDrewart · 2816 4/6/21
It's nuts in a Flamethrower build. But even with other weapons I find engage more useful than just for avoiding teammate damage; it means that if you fail to kill, the enemy is still engaged on you and not the other investigator, so they can take their full turn. — suika · 8839 4/7/21
Without the rape whistle, you'd often not engage because you need to save actions. But being able to engage for free before every fight is more beneficial than you'll think. It adds up over the course of a campaign, and there's certainly far worse cards you could take. — suika · 8839 4/7/21
One disadvantage with Flamethrower is, that it still counts as an action. So it will provoke AoO, should you engage a second enemy to burn both. It would be even better with that weapon as a lightning bolt trigger. — Susumu · 271 10/17/21
0

I think Riot Whistle is a good item for Zoey Samaras.

And I have a question?

If Zoey Samaras equip Riot Whistle and use Spectral Razor.

LuckyCat · 1
The answer is no because Spectral Razor is a Fight action, not an engage action. It would work for any card that says bold "Engage". Whistle would not get you any savings there. It's also a card that I find tricky for Zoey because she wants either this, Rosary, Mirror, or her signature accessory. — StyxTBeuford · 12744 11/23/20
Yeah, even though Spectral Razor engages an enemy, it doesn't have the Engage action designator, and that's what Riot Whistle cares about. Contrast Righteous Hunt in the same set, which does have the Engage action designator and thus could be used with Riot Whistle's additional action. — Thatwasademo · 44 11/23/20
The thing that really hurts this is that accessory slot. Without that I guess it might be broken, but with it it's too expensive. — SGPrometheus · 688 11/24/20
The accessory slot isn't a huge deal, considering it's in Guardian -- its only real competition at level 0 in class is Hallowed Mirror. — Thatwasademo · 44 11/25/20
one sad thing is that zoey's cross is accessory. — elkeinkrad · 410 11/25/20
Zoey can be a Monster Hunter AND a Relic Hunter. Then run Backpack (2) to dig for your great accessories and weapons faster with a high item density. — Death by Chocolate · 1258 11/25/20
What about "Get Over Here"? It's "Engage. Fight." ... or is that not an "engage only" action? — omalleyp2883 · 1 2/11/21
I would think that it won't work with Get over here because of the fight part. — walawalo · 1 2/24/21
It doesn't matter that it also fights, as long as the action has the engage designator you can use Riot Whistle's action on it. — Thatwasademo · 44 3/13/21