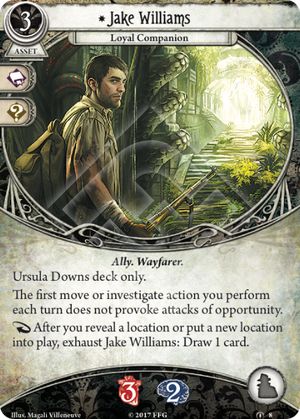 Saying Jake Williams is bad because Dr. Milan Christopher exists seems incredibly unfair given the fact that Milan is basically the best Ally in the game. Even taking taboo out of the equation, Jake is still incredibly good with Milan in your deck even before grabbing Charisma. For one thing he can help you draw into your other Seeker allies (Milan, Rook, Horowitz). Revealing and putting locations into play is very easy thanks to Pathfinder and Shortcut. His soak and his AoO prevention is also HUGE for Ursula decks that aim to clean up a scenario quickly. It lets Ursula rely on her 4 more strongly, as she doesn't have to worry about losing as much tempo if the board gets cluttered. This is especially nice in true solo where one of the biggest issues a true solo deck can run into is being bogged down by too many enemies at once. Jake, alongside Ursula's free action, makes that so much less of a concern. Jake is incredibly good, and alongside the run of great Seeker allies Ursula can run makes Calling in Favors a very strong choice in Ursula decks.

In a game with lots of players, Jake's reaction ability becomes less consequential, but in a 2 player game, drawing an extra card nearly every turn and ignoring an AoO becomes extremely valuable. In some scenarios where there are location encounter cards, he's just nuts. He's definitely undervalued!

adjeprado · 5
When I used to play true solo Ursula, a lot, I definitely found Jake to be very useful. Good for enabling you to use Fieldwork to evade — Zinjanthropus · 213 1/6/21
2

Jake Williams saved me from bad starts already two out of the four scenarios that I played with Ursula Downs. I bought Miskatonic Archaeology Funding first, so I can run Dr. Milan Christopher and Whitton Greene at the same time. Last scenario I had all three of them out at the same time. One move action yielding two cards, a clue and a resource? yes please!

The first ability just adds security in multiplayer games. Often I would say "Don't worry about enemies spawning at me, I'll bring them to you!" This saved quite some actions where one of the fighters might have come over to safeguard. The ability is good with Archaic Glyphs to also investigate and evade after a move. Great flexibility there.

Weges · 42
How does he make bringing the enemies over efficient? Once you spend an action on that you still have two where his ability doesn’t help. — Whitemage · 3 12/13/21
An enemy *might* spawn, where the fighter would otherwise move with me. This depends on your play style of course. — Weges · 42 1/12/22
1

Overall probably the worst thing about Ursula downs is her special card. The bonus this cards is nearly non existent because you move and the enemy is still on you at your new location. Maybe helps get enemies closer to allys so they can fight sooner. Jake is a good damage soak though at 3/2. Overall id say hs is easily replaced by dr. Milan. However if you have him out before you get one let him tank a few hits first.

vosh · 9
While Milan is definitely better, Jake's abilities are extremely useful for Ursula. The first one allows her to either leave locations with massive monsters without getting clocked or move closer to allies who can kill her enemies, and she should be able to evade after her move. The second ability is consistent card draw if you get him early, which is also strong. I'm not saying he's on par with Zoey's cross or Roland's .38 even, but i think he makes Charisma an even better first upgrade. — SGPrometheus · 688 2/17/19
The 2nd ability is great in Forgotten Age. Every time you explore successfully you get to draw a card, then you auto-move to the newly revealed location and Ursula can use her free investigate. After getting the Expedition Journal, it gets even more powerful: free explore, free card draw, free move, free investigate. And you still have 3 actions left... — Ezhaeu · 46 2/17/19
He is also support for fieldwork, which you can use to pump an evade or bow shot. — Myriad · 1157 2/17/19
I think I've kinda slept on Jake Williams a bit. being able to move without an AoO combos pretty well with Fieldwork for enemy management. Even better if you use your free action to investigate with Prophecy Foretold. Still not enough for some situations, of course. Sadly, being a 1-of in a 30+ card deck makes him pretty unreliable. — Zinjanthropus · 213 3/8/20