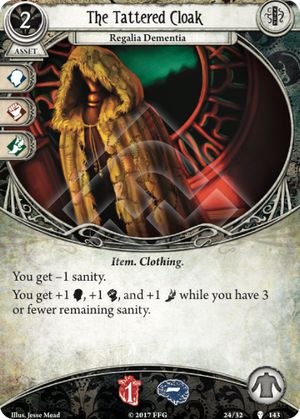 Looks like a card you would want to have with a desperate-deck. Getting you just that little bit faster to your sanity threshold while also giving you a buff as long as you keep it. You get this in scenario 3 after defeating the Possessed Oathspeaker, for everyone who might be wondering as I had :D

Nezuminotabi · 3
Tattered Cloak is also nice for important buffs in classes that don't have many options. For example Ursula would like an agility buff when using the Bow but Seekers don't have any static boosts AFAIK. I have used Crystalline Elder Sign with her before. Or Survivors getting a Combat boost (until Jessica Hyde showed up). You could play this with Pete with Peter S (L2) and the Teddy Bear and be at a 6/4/5/5. The Desperate Skills plan works but I didn't really enjoy playing the game when I went that route. — TWWaterfalls · 722 4/23/20