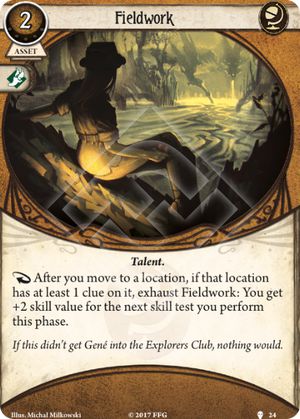 I completely agree with the other review, but I feel like it's worth mentioning that this card synergizes really well with Ursula Downs' ability. Both Fieldwork and said ability require you to move before you can activate them so you end up investigating after moving very often. It gets even more efficient once Pathfinder enters the mix. Almost every Ursula decklist on ArkhamDB includes this card. It's almost like a secondary signature card.

EDIT: as a side note on Fieldwork with Ursula, if you have Jake Williams in play, you can make a move action without taking an AoO. This means that you could move with an enemy engaged, use Fieldwork to evade that enemy, then move away (using your extra action to investigate if there's a clue left on that location) so that you can avoid becoming engaged again during the enemy phase. I hadn't thought of this before because I almost never actually play Jake. Becomes more efficient with Pathfinder, of course (though you can't activate Pathfinder if you have an enemy engaged iirc).

It also probably works well for Luke Robinson, though probably not to the same degree. You could use Dream-Gate to warp across a scenario and then use Fieldwork to investigate the new location. This also improves with Pathfinder, of course. That being said, I doubt that it is an auto-include in a Luke deck, as he can't necessarily Gate Box every turn, and he doesn't inherently get perks for movement.

Don't forget that it can also be used for non-investigation skill tests provided that you move to a location with at least one clue. In practice this is not terribly common. I have run into situations where I want to evade an enemy who's one location away to help a teammate. I have also used it for questing tests, though some of these need all of the clues gone before you can actually do them. Once again, Pathfinder helps a lot to make these acts more efficient.

Zinjanthropus · 213
Luke could use Fieldwork to get bonuses to his test-based events, and do so even if the location where he wants to resolve the event doesn't have clues. Trigger Gate Box, use Vantage Point to move a clue to Dream-Gate, then move in, trigger Fieldwork, play your event and finish up with a 0-shroud investigate to pick up that clue. I've no idea if that's very useful, but it is a way how only Luke can use Fieldwork. — TheNameWasTaken · 3 3/5/20
6

So playing a fairly fast and lean Ursula deck right now and I realized something that made it worth writing down, while its obvious fieldwork is good with Ursula, the non obvious thing Ursula can do is trigger field work or her ability in any order, so you can enter a location and investigate it and have field work be a bonus to the next test that you perform, instead of just boosting the investigate.

I didn't realize until today that means if you have two field works you can stagger their triggers, one before Ursula's investigate and one after, which lets you either investigate with a +2 twice (often better then a single +4) or even investigate and then get a bonus against a treachery or special effect.

This card pretty nearly reads: Whenever you enter a location with a clue on it. Draw a Perception card. Sept the card cant draw anything but more Perception cards.

You can expect this to net you 3+ useful triggers if you draw it in the first 2 turns. If drawn later then the returns will depend on the map.

This card has a short and simple learning curve, try not to explore new places as a last action, also your friends should get used to leaving you some clue scraps, they shouldnt be investing cards and time into clues that you get a bonus on picking up.

Definitely worth the slot for folks who can freely slot Yellow cards. Probably not worth the dip for the Dunwich Investigators.

The biggest downside is that this might be a dead draw if drawn lategame.

-EDIT: A lightning gun Roland Banks will really appreciate this card as a way to keep up his clue gathering prowess.

Tsuruki23 · 2350
This is can be very versatile, as the bonus is to ANY skill test, not just investigaion. So it's useful if the location forces you to use a different stat for investigation, fight, evade, use spells or other assets with skill tests,... — Django · 4434 1/5/18
Can you use 2 of these at 1 timw for +4 for your next skill check? — vosh · 9 2/13/19
Also remember that this applies to any skill test, not just investigating. For example, if you have a friend in trouble with a monster next door (with clues present), you can move, engage the monster off your friend, the evade with a +2 bonus to the skill check. — olvenskol · 1 4/9/19
Interaction between Fieldwork and Duke: I use Duke to move and investigate. I use Fieldwork as my new site has a clue. So does Fieldwork activate on Duke’s investigate, afterwards, or player’s choice? Can I investigate and then use Fieldwork? Is there a window of opportunity? — brerlapine · 19 9/13/19
@brerlapine: this is an old question, and I'm not actually checking my facts, but iirc, Duke's move+investigate isn't something that has a window in the middle, so I think you would have to wait until the investigate action is finished to activate Fieldwork (or you could activate before if you already moved once). meaning that if there was one clue on the new location and you picked it up, you can't activate Fieldwork there. on the positive side, your investigation action does happen before engaging any new enemies there. — Zinjanthropus · 213 3/6/20