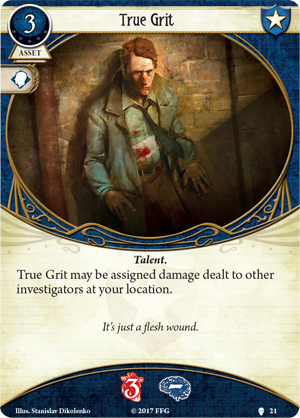 With a few exceptions, I think this is a little too expensive for most Guardians. Guardians must play a weapon to be effective and certainly want an Ally as well. That means True Grit is a difficult luxury to afford. While a slotless damage soak is nice, and the ability to protect your teammates even nicer, I think the price is going to be a little too rich for most Guardians in most circumstances. Guardians naturally have large health reserves which usually don't require further augmentation. As far as helping out teammates goes, I would prefer Emergency Aid, which is a) cheaper, b) does not have to be played prophylactically, and c) has a wonderful combination with Beat Cop II. Of course, you could run both, but that strikes me as unnecessary; damage is generally less common than horror in this game, and markedly so in the Dunwich and Carcosa campaigns.

But what about those exceptions? Well, the first and most obvious is Mark Harrigan. Mark struggles mightily to fit True Grit into his cost curve (at least before he picks up Ever Vigilant), but for him, it is worth the effort. Because of Sophie Mark really does not want to put any stray damage he might take on himself. Putting any on Beat Cop II, Mark's ally of choice, is even more wasteful. True Grit's triple damage soak is helpful to him personally, and the ability to help out a teammate and draw a card in the process is even stronger.

The second possible exception is Carolyn Fern. Unlike other Guardians, she has low health. She's seldom lacking for money, either, since she probably doesn't want to play expensive weapons and she has some of the best resource generation in the game. So True Grit is workable for her. But it simply isn't a dynamic card for her the way it is for Mark. More often than not, I think she has more powerful options for her money.

The third exception would be the Forgotten Age campaign, because damage is so much more prominent there than in the rest of the game. Seekers and Mystics, with their low Agility, small health pools, and frail allies, really struggle to cope. Even massive Guardian health reserves come under stress. Under these circumstances, True Grit must merit stronger consideration from all Guardians.

A final gameplay note. True Grit encourages the whole team to stick together in one location. For me, this encouragement does not change much, since I was already playing that way. I think it is usually wise to stand together; this allows investigators to boost each other's skill tests and cooperate to efficiently take out enemies. While there are certain exceptions, it's generally true that (as you might expect in a horror-themed game) splitting up to cover more ground is a bad idea.