This card gains: “Group limit 2 copies of Delve Too Deep in the victory display.” 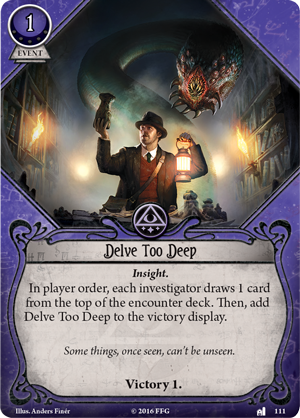 A card for the min-maxer in all of us. Play this card in early scenarios to make your life more difficult, but reap the rewards of experience and upgraded cards in later scenarios.

Now the card seems deceptively simple, but there is a lot of nuance to playing it. Ideally you want to play it when you can afford extra actions, but not so early in the game that you aren't set up. Often this means holding on to your D2Ds until the last round of the game, triggering both and then ignoring the encounters you pulled (to the best of your ability) in order to finish the scenario. But there are other ways of mitigating this as well: a huge number of encounter cards are will tests and upgraded Mystics have access to Blood Pact which can be used as a freebee at the last doom in an agenda. Of course beware non-will tests and enemies that may pop out from the encounter deck instead.

The other nice thing about D2D is that it makes upgrading a little easier in the mid game. Because you get that experience as a permanent upgrade, in an 8-scenario campaign a D2D played in the first scenario is worth (1 exp 7 remaining games = 7 game-experience points) while one played in the penultimate scenario is worth (1 exp 1 game = 1 game-experience point) and a D2D played in the final scenario is just masochism (assuming you don't carry your experience through). For this reason you want to play your D2Ds early in a campaign, and swap them out when you have 3-4 scenarios remaining. This is especially important because they have no skill icons and as such are actually fully dead space in your deck unlike damn near every other card in the game (exceptions for Wendy and Ashcan Pete who can discard cards as part of their ability, of course).

So yes, get a little dangerous, plunge a few deeper mysteries and reap the benefits of playing on the wild side.

Difrakt · 1048
Good review! I just would like to throw in that this card in the Victory display only counts for 1 scenario, it is returned to your deck afterwards. Your calculation and the word "permanent upgrade" hint in a misleading direction. As you often finish a scenario without drawing all cards in your deck, it is very, very unlikely that Delve Too Deep gives you as many xp as you depict. — Synisill · 746 6/14/17
It's not xp that's I'm referring to, it's the effective upgrade-lifetime. Experience that you have for 7 scenarios is worth far more than experience you only have for a single scenario. — Difrakt · 1048 6/15/17
You can use "scrying" and "alyssa graham" before playing this card, to know what doom awaits. In maps with "resign" option, other players can resign before remaining players use this card, so you draw less encounter cards. On a personal note, this card is insane. In a 2 player game we used 3-4 of these over 4 adventures EACH TIME, so you can calculate for yourself, how many bonus XP we got out of it. — Django · 3711 6/17/17
This card is also nice to spawn victory monsters, that are burried deep in the encounter deck. — Django · 3711 6/18/17
" Because you get that experience as a permanent upgrade" What? Its not a permanent card, its an event. You get 1 EXP ONCE for when you play it, not every consecutive game? — Vortilion · 1 1/22/20
Oh, got it, sry... You mean you can play it each scenario... — Vortilion · 1 1/23/20
6

This card is really fun and really good. Experience is immensely powerful in this game, and a multiplayer group that Delves aggressively can easily get about twice as much of it as a group that does not. A few tips for using Delve correctly:

1) With only a few exceptions (The Gathering and Extracurricular Activity come to mind), you don't want to Delve in the middle of the scenario. Even if there seems to be a quiet moment, Delving will rapidly make it unquiet, and this is no good. Rather, you want to Delve almost at the end of the scenario, right as the investigators are poised to win. If you're about to resign, to spend clues to advance the last Act card, or otherwise achieve the end of the scenario (and even when you're playing blind, it's very obvious when the scenario is about to end), that is the time to Delve. The majority of scenarios have a design that makes it possible for the investigators to hang around for a turn or two while on the cusp of victory.

This has numerous advantages. First and foremost, you don't have to deal with a lot of the encounter cards. Any monsters that show up can be ignored (although you might want to kill them if they're VP monsters), any damage/horror you take that doesn't kill you is irrelevant, etc. Moreover, since you have seen what the encounter cards in the scenario are (if you didn't know them already), you should know if Delving is safe or not. If there's an encounter card that might kill you or otherwise cost you the scenario, you can properly weigh the risks before Delving.

3) Cards like Ward of Protection, "Let me handle this!", etc., can make Delving at the end of the game considerably safer.

4) The other time to Delve is when you are certain to lose. If everything went wrong and you are inevitably going to have to resign in defeat or take trauma anyway--and we've all been in this situation--there's no reason not to get a VP or two first.

Played in this way, the drawback of Delve Too Deep is not really the encounter cards it draws, which hardly end up mattering at all, but just the fact that it takes up the spot of a card that could otherwise help you win the scenario. But the VP reward is more than enough to justify that, in my opinion. And you can of course replace it by the the last scenario or two.

If you haven't tried a multiplayer group in which every investigator packs two copies of Delve (use proxies to make this happen), I highly recommend it. Your decks will power up incredibly quickly.

CaiusDrewart · 2515
This card is nuts. Were playing dunwich with Team Seeker (Daisy, Minh, Norman and Rex). We have 6 delves in the team and played 4-6 each mission. We just completed "where doom awaits" and have accrued 70 XP now. We often got more XP from delves than the actual adventure. Delve also assures you get all VP monsters. — Django · 3711 3/30/18
In a group it's helpful to be at same location when playing "delve too deep", as "a test of will" and "ward of protection 2" can counter other player's mythos cards. — Django · 3711 3/30/18
Scrying 2 is very helpful to arrange mythos cards before a delve, so the fighter gets the monster, ancient evils are countered and tests are assigned to person with highest attribute. — Django · 3711 3/30/18
Just want to clarify - when you say proxies you mean creating extra cards to replicate this effect? As a work-around to buying multiple copies of MM? — Time4Tiddy · 165 6/18/19
@Time4Tiddy: Yes, my 3-player group often wanted to run 6 Delves, but we didn't want to buy 3 copies of Miskatonic Museum, so we often proxied it with some other Mystic card no one was using. Delve is the only card that we felt strongly enough about to bother doing that. Of course, now that the Taboo list is a thing, we don't need to do that any more. — CaiusDrewart · 2515 9/4/19
Does this experience point count for everyone in the group or only for the one playing it? — Vortilion · 1 1/22/20
@vorilion - For the whole group — BraidsMamma · 7 4/21/20