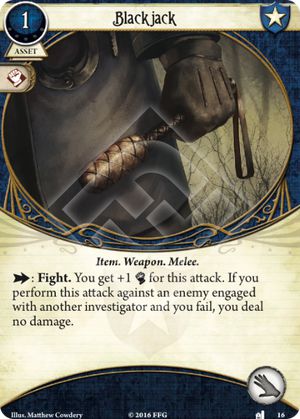 This card is a bit hard to quantify. The obvious comparison to it is against the Knife that is available to every other role in a neutral form. At the same cost and strength, there are only 2 factors to consider when deciding which one is better over the other.

Perhaps you don't consider blackjack or Knife, because you prefer to carry .45 and machete as your includes in your deck. For those types of decks, then this isn't even a consideration. But in several cases I have considered machete and Knife/blackjack as it is a considerable cost savings over the .45 and 80% of the time the machete does the job of the .45 anyway.

Also, if you are solo, blackjack isn't for you. In large groups, you may be required to peel monstrosities off of people and help them out. In these situations, with the blackjack you expect to get some action efficiency.

There might be a scenario or two there missed, but that covers the majority of what you are looking for in comparison. The main situation where blackjack is best is obvious in the 1 health enemy category because the blackjack can save you an action and it doesn't make sense to sacrifice the Knife when it is on someone (in most circumstances).

If you don't care what happens to your allies, "swing away" and choose the Knife so you have an option for a burst damage opportunity.

If you do care about your friends (how nice of you), then the majority of the time you are using this weapon you are saving an action for fighting enemies for your allies. That was my thought pattern with using this for a four player campaign. On average over three scenarios so far, this has saved me perhaps 1 action per game. Also, if you wiff on your strong attack with the Knife you are left without a weapon anymore and the blackjack doesn't tempt you with that.

What I do like about the Knife though is that you could save an action with a single attack doing 2 damage when you need. So, this can also save you 1 action per game. Also, when you have that machete out in a situation such as this, the Knife can possibly be useful still for taking out 1 of 2 enemies engaged with you to turn that machete back online.

Is that worth having over the Knife? I tend to think that it is not in practice. The Knife just seems to be a better choice from my perspective. Just in case someone was going through these considerations as well, I thought I would share the experience I have had with the card here.

Bronze · 171
Compared to #machete, on 2 HP enemies, this card saves you the action of engaging enemies so can still kill them with 2 actions, with no risk of harming allies. — Django · 4434 5/11/17
The bit about not dealing damage to your buddies engaged with the enemy you're attacking is nice, but I can't help but feel that this should have another line of text: "If the attack is successful and the enemy is *humanoid*, exhaust that enemy." Bop them on the back of the head to knock 'em out. — ArkhamArkhanist · 9 8/30/18
The knife is better. — Andronikus · 1 5/20/19
3

Let's give Blackjack a new review, long after it's debut and after the Taboo List has given it a better chance of viability, now Machete cost 2 exp:

I can summarise the benefit of including Blackjack in your deck in one word: consistency. I'd argue that it is the single most consistent weapon in the entire game, as is espouses multiple facets of that virtue:

Arkham Horror has a wonderful unpredictability to it, that often means your best laid plans when crafting the ultimate deck will not survive first contact with the mythos. Everything from the catch-22 of not being able to play a weapon without incurring an attack of opportunity from an engaged enemy, to the unpredictableness of where any enemy will show up, who it engages, and what dastardly text will be written on it to counter certain investigator staples. To those that have been burned too many times by this damnable chaos, Blackjack will offer some reprieve.

Is it a good weapon? Hell no; it's a one cost asset after all. With no zero cost weapons in existence yet, Blackjack represents the bargain barrel deal of armaments. But it's cheapness is a strength in it's own:

In the end, this card isn't going to be a part of any fancy combo, nor the centrepiece to any deck, nor the subject of a memorable moment in your Arkham Horror career, but this does not make it a bad card, just a boringly average one.

Lucaxiom · 3548
I just can't see how this card is "average" at all. It's easily one of the 10 worst cards in the game. As for the two upsides you point out: if you're looking for a cheap item to protect your more valuable stuff from the encounter deck, there are tons of cheap options out there available to every investigator that--unlike Blackjack--actually are sometimes useful to have in play. As to the point about having redundant weapons, I agree that this is important. But Blackjack fails here. Since it cannot deal +1 damage, it simply cannot effectively fill this role. — CaiusDrewart · 2816 10/30/19
I have to agree with Caius, it's one of the worst possible cards you can include in your deck because it effectively does nothing. For 1 resource you could have had Knife, which at least gives you the option to hit for 2 damage if you need it, or for one more resource you could have had Kukri to hit for 2 if you manage to succeed and have the extra action to spare. Heck, you could have even slotted in Prepared for the Worst and grabbed an actually good weapon like the Thompson or the Enchanted Blade. — StyxTBeuford · 12744 10/30/19
I dont see the average either. Never ever have I played this in a deck and not wished it was a Knife — Tsuruki23 · 2350 11/4/19
3

This card is exceptional as your team gets bigger.

In a typical 3-4 player game, monsters will be engaged to your far friends more often than to you. Now, you could spend an action to Engage, or invest in a Riot Whistle. But blackjack is cheaper, straightforward, inexhaustible, keeps your accessory slot free, and its upgrade isn't bad either.

When you run up to a friend on the brink of defeat, try to whack their worst nightmare on the head, and then see a tentacles, there's nothing more relieving than knowing that they're still going to live because you used your Blackjack.

So, if you're not using both of those hand slots, why not fill your offhand with a blackjack? I had a great Leo Anderson campaign in Carcosa running Blackjack & Survival Knife with a party of 4 investigators.

tercicatrix · 13
It is still problematic, that it deals only 1 damage. Whacking their worst nightmare three times is VERY ineficient. Upgraded Safeguard let you engage before them, there are several events, that might be considered, if you want to engage, and the hand slot is at least as contested as the accessory slot for guardians. I can't see a deck, that really wants this card. — Susumu · 271 5/29/21
The upgrade does 2 damage — StyxTBeuford · 12744 5/29/21
Sure, but that does not make the level 0 card any better? Unless, if we see an "Arcane Research" like card in the future, that discounts Guardian weapons. — Susumu · 271 5/29/21
If you can't kill it with a Blackjack and Vicious Blow, you should probably be peeling it off properly anyway. — tercicatrix · 13 5/30/21