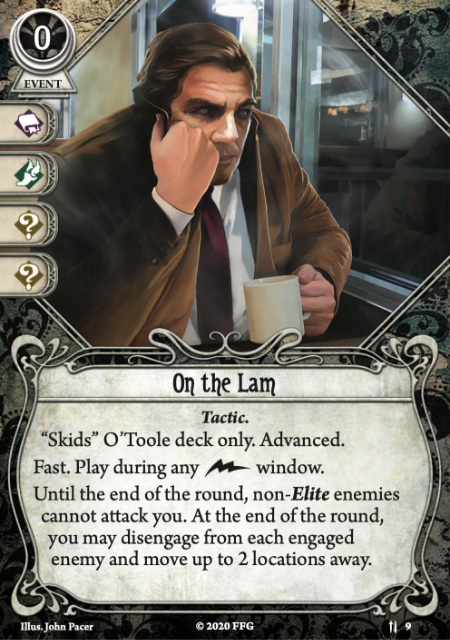 There are a few differences between this and On the Lam:

Most obviously, "At the end of the round you may disengage from each engaged enemy and move up to 2 locations away" - so it is like a mini-Elusive, which is nice given that that card has been taboo'd. Two locations puts you out of the range of most hunters, and the enemies not attacking you bit means you can drag a LOT of enemies to an out of the way location, and then just jump 2 locations away. Nifty. Before taboo, I normally packed Elusive in Skids for exactly this sort of trick.

However, there is a timing change too; it's not "Play after your turn begins". This means you can now take an action and then play On the Lam. It also means you can mitigate a few treacheries with it too - Serpent's Ire or Deadly Fate are treacheries that have a test - so a player window in the Mythos phase - and failure results in enemies attacking you. On the Lam mitigates that effect (for non-Elites).

There is also a player window at the start of the Investigator phase, so if one of your "friends" is about to do something that would get you attacked... well, great.

In a pinch, there's even a window after Hunters move, so if you're suddenly surrounded in the enemy phase you can avoid all the attacks (and then move a couple of locations at the end of the round).

All in all this is a much more flexible version of the original On the Lam, and potentially a very useful "get-out-of-jail-free" card (kind of appropriate).

The big question is, is it worth Hospital Debts? In my opinion, yes; Hospital Debts (original) has been quite soft since Rogue started to get good economy cards. The biggest issue with Hospital Debts (new) is that it takes 3 turns to clear, so a late draw might be unclearable. But it's still not that bad a weakness - missing out on 2XP is annoying, but it's not like getting mental trauma.

AndyB · 878
Both Hospital Debts take 3 turns to clear, for what it's worth - the Advanced version combines its higher requirement with a higher limit per round — Thatwasademo · 39 6/13/21
Could it work on Deadly Fate? After I played On the Lam, it seems "that enemy attacks you" choice no longer changes the game state, so that I cannot choose, don't you? — elkeinkrad · 208 6/14/21