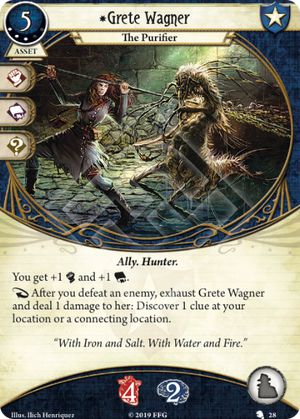 It makes me laugh that Roland Banks, the most straightforward investigator, has seen more and more weirdness appear in the guardian set. From knives and pistols In the basic box, you’ll now often see him with magical blades or flesh wards. One version of him involves Dr. Elli fishing for mystical artifacts. You wonder how he writes around having a mystical mirror on his special reports.

This is another thing he’s probably covering over with the trademark agency black highlighter: a mystical purifier. Of course.

For five resources, It’s an expensive pairing. But it’s an effective one. You can either investigate when enemies aren’t around with a solid degree of comfort. Staying in place while getting clues elsewhere is an extremely useful thing. And if you’re already running beat cops, and have some ally healing tools, it becomes even better.

For either one action or a fast exhaust of your beat cop, you can remove two clues from your weakness. Next turn, kill another rat or aloof foe and you’re out of the hole completely.

The German witch hunter helped you discover numerous clues from the rat swarm. Maybe that would stay off the official report.