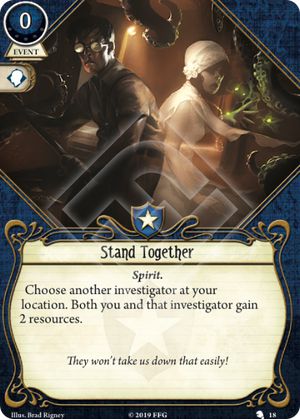 With the release of the Nathaniel Cho deck, guardians now have an incredible array of resource generation in-faction at level 0. In the past, I would slot two Emergency Cache into practically every guardian deck I made, but these days that feels greedy. I say greedy because cards like this one give your team more resources, even though you get slightly less (I mean, mathematically you get 33% less resources while generating 33% more resources total). Similarly, Clean Them Out gives you one less resource, but eliminates a threat for your team. Relentless pays you for overkilling enemies, which doesn't really fit into the "less greedy" theme I'm trying to point out here, but it is another in-faction resource generation card introduced by Nathaniel Cho.

My point is that it feels like guardians have better options than E.Cache these days. Though you can rarely do better than "1 action and card: 3 resources," you can often do something else in addition, which could prove more useful than just gaining an extra buck.