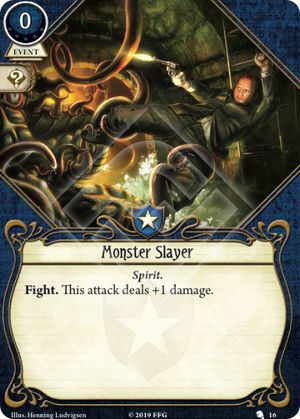 Love it. A hands-free 2-damage attack that costs no resources!

When you're fighting with a limited-ammo weapon (Flamethrower sais hi!) or your name is Randall Cho then the ability to save a bullet and finish off a foe with a punch is very useful.

Anybody with a high fight stat can make routine good use of this thing (Mark Harrigan for example). Another clutch use is when youre playing an expensive build and want a cheap attack (Roland Banks decks routinely burn a lot of money) or if you have a conditional weapon (Machete).

You can use this to supplement a Vicious Blow as a means of accessing extra damage with unarmed attacks, or you can layer the two for a straight up 3 damage attack.

Tsuruki23 · 2280
I think you mean Nathaniel Cho. Randall Cho is the brother (who heals damage or finds you a weapon when he comes into play) — Zinjanthropus · 209 8/29/20
To understand correctly, this card IS the fight action, correct? This does not allow enabling the fight action of your weapon to boost damage? I was thinking it would work great with Cho if it could be chained with a weapon, but my understand of the rules says, despite being an event, it is the fight action. — GrandMasterJ · 2 9/1/20
You are correct, J. You can only do one kind of an action at once. If you're just looking to boost the damage on a Fight action, there's a card for that :) — MiskatonicFrosh · 139 9/2/20
Vicious Blow is better than this is for anyone who isn't Nathaniel. — OrionJA · 1 9/9/20
Or Calvin: he can't take VB, but can take MS. But for people like Mark I agree: you either take this in addition to 2x VB, or take just VB instead. — Susumu · 222 3/9/21