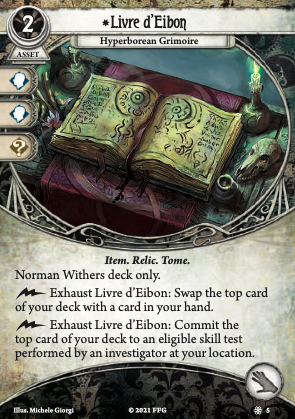 After years of being hobbled with the sub-par signatures presented in his book reveal, the real thing is finally here, and it really helps cement Norman as the efficiency machine he was striving to be.

Previously, Norman struggled with some action-order constraints, and his deckbuilding had compatibility issues with skill cards and non-Fast events. Being able to swap his topdeck card at will frees Norman from a lot of these problems - and when the Livre is out, you're probably going to be using it every turn. Notably, as a Tome signature, it's probably the easiest one in the game to pull from your deck courtesy of Research Librarians. It's worth digging deep on a mulligan for this book or your book slaves, because you can usually investigate just fine out the gate with 5.

Traditionally, you'd use his ability to cast half-off Working a Hunch or cheapen an expensive asset like St. Huey's Key. Now that he's officially joining the fray, Edge of the Earth brings him lots of toys tailor-made for this book: Written in the Stars lets you topdeck that Deduction and throw it into a slew of Investigate tests, hoovering up 6+ clues in a turn. Astronomical Atlas accelerates your draw and, at its simplest, lets you get one more use out of a / skill before you officially draw it, provided you pass the test. When the Livre isn't discounting a card of your choice each turn, it's essential for setting up these big combos with the rest of his kit.

There are other conceivable uses for it in the Seeker wheelhouse - a Research-focused deck can topdeck the surprised rabbis it ends up drawing, ensuring no such cards are ever wasted. If you have mid-turn draw effects, you can do similar with Cryptic Writings, though swapping it into your hand through the Livre or the Atlas likely won't trigger the free-play effect.