Commit only to a skill test during an attack or evasion attempt against an enemy. That enemy gains retaliate and alert for the duration of this skill test. After this test ends, draw 1 card.

Colin Boyer
The Search for Kadath #111. 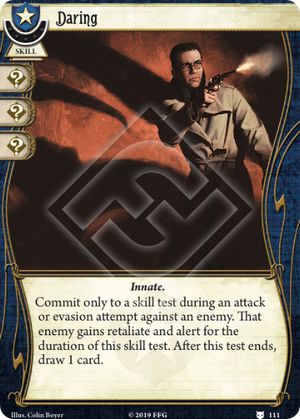 When committing Daring to a skill test, you still get the card draw even if you pull it back with Silas Marsh ability. Which means you can use Daring once per turn for free while also drawing a card!

Daring sets up a lasting effect on the enemy, and a delayed effect "after this test ends". So if you pull it back to your hand, you still get the card draw. Even when pulled back to the hand, the retaliate and alert still work, so be advised to procede with caution.

EdTheMad · 6
It would also synergize nicely with Silas' "box" signature assests, since both can pull all cards committed back to your hand.... Of course, that gets resource-intensive, and Silas tends to run lean, but.... — LivefromBenefitSt · 778 10/20/20
Hi friend,I saw your review and I think it's not correct，so I asked the designer,and his answer is as follows : — Ruages · 1 4/7/21
The review is wrong. While delayed effects do persist beyond the resolution of the ability that created them, and continue to affect the game state even if the card that created them leave play, in this instance, the effect “After this test ends, draw 1 card” is not a delayed effect. It’s really just a separate ability—it probably should have been written on a different line in order to denote this. It’s similar to the ability “If this test is successful, draw 1 card” on Manual Dexterity, for example, which is not a delayed effect, but a simple reaction ability that would trigger immediately when its condition is met. A delayed effect would be something like: “After you commit this card: Name a symbol. If that symbol is revealed during this test, draw 1 card.” In this hypothetical, the “draw 1 card” is a delayed effect. — Ruages · 1 4/7/21
Hi Ruages, that's great that you reached out and heard from the designer about this--the answer is surprising and overturns what had been the community consensus about the card. You should consider sending the ruling to ArkhamDB so it can be officially posted. — CaiusDrewart · 2515 4/15/21
Also this is a point outside the rules discussion but MJ (lead designer) uses she/they pronouns (recently came out as trans). Not accusing you of anything but thought you should know — Sycopath · 1 4/15/21
So how does the card interact with Silas if he uses his ability to return the card to his hand? It's not clear to me from reading here. — Auraco · 1 7/16/21
Silas pulls it back before the ability triggers so it doesn't trigger — Vultureneck · 71 9/22/21
Yeah, to clarify, Silas does not get the card draw if he returns it as it isn't considered a lasting effect. However, the text about the enemy gaining alert and retaliate does say "for the duration of this skill test", so that's a lasting effect and Silas can't remove that by taking it back. Goes from being synergistic to quite the opposite with the clarification. — Lasiace · 7 10/9/21
4

Great skill card for characters who have money and/or draw issues. characters take a lot of actions and resources to build a powerful combat engine and Daring will greatly help a Roland Banks or "Skids" O'Toole who are trying to branch out to do clues too still fight effectively despite empty pockets.

Note that the bonus applies to non-binary methods to fight and evade, making this card particularly interesting to characters that split their fighting capacity between and or or a character evading with . Case in point: Diana Stanley who might have Shrivelling in one hand and Enchanted Blade in the other or Finn Edwards who might have a Switchblade in hand and a Backstab in mind.

The Retaliate and Alert are rarely issues, since throwing a +3 at something is basicly a surefire way to pass a test.

Tsuruki23 · 2104
One minor thing to note is that this card does NOT seem to synergize with Double or Nothing, because you draw the card regardless of success. Hence not resolving the success twice. — 1337duck · 1 5/15/20
3

I like this card for Diana Stanley. It works with both standard weapons and spells that use willpower, and Diana can handle the occasional counterattack with her cancel cards. It is more flexible than the core set cantrip skills, which are their main weakness.

jmmeye3 · 554
I think this card is just great for every Guardian. The retaliate clause is just not a big downside when you're getting +3 to the test, and everything else about this card is sweet. I love that it can be a better Overpower most of the time, but it has the flexibility to work with non-Combat attacks. Plus, by letting Guardians evade, it's a nice answer to Vengeance enemies, Poltergeists, etc. — CaiusDrewart · 2515 11/30/19
Silas can also take it — Zinjanthropus · 176 6/24/20
For Diana it has also a nice combo with the 2 XP .45 Automatic. Because she can trigger the ignore, even if there is no true retaliate enemy around when she empties the gun. — Susumu · 161 8/14/20