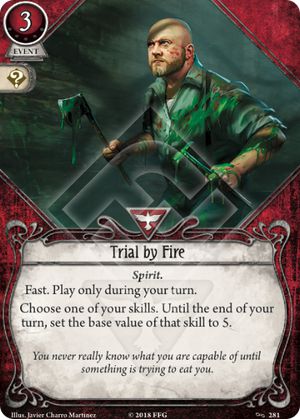 This card is great for most survivors, particularly those with Achilles stats like Wendy’s fight, Calvin anything or Silas intellect or willpower. Combined with Leo de Luca, quick thinking or any number of other cards can give you 4-5 turns with a giant boost stat. Also ace of rods can give you extra turn with one test at 7! Watch Wendy crush the ghoul priest, Silas Hoover up clues or laugh at an encounter 4 test. Also Ashcan Pete and Calvin can prosper plus any other char that can take the spirit trait.

This is the level 1 Will to Survive. It serves a very similar function.

All in all this is a great card, mandatory in Calvin Wright and damn-near everybody else can use it for something, at the very least 5 is never useless.

While there are no XP versions of Trial by Fire there is still The Red-Gloved Man who operates VERY similarly but has loads of other advantages. There's also obviosuly Will to Survive.

Obviously this card has some powerful potential for special characters like Calvin and Preston, but I have tried to use this card for normal characters (with a mix of high and low stats from 2-5), and it was not as great as I thought it would be. For a normal character the ideal would be to use this on a statistic of 2 and increase it to 5 for a turn, so it is giving you +3 on a statistic for a full turn. The problem is that it is actually kind of tricky for a typical character to use this on three skill checks in the same turn, and even harder when that skill isn't the primary skill that your character is set up to employ. I envisioned using it to plunder a site for clues with three back to back investigate actions, but it just wasn't very common for my non-investigating character to get into the situation where this would happen, I was usually out of position since I've been doing my primary purpose of dealing with monsters. In practice it was much more likely to use this card for no more than two actions in a turn. Obviously this card is way overpriced if you use it only on skill test in a turn, but really, it is still a fairly expensive way to get a bonus even on two tests in a turn. So what I ended up with was a situational card that would give a + 3 bonus, twice, only to one of my weakest skills, and cost a lot of money to play.

This is still a flexible card with a lot of potential uses and characters who might have reasons to use it, but I don't think I'll be just throwing this in, I will want to think carefully about why I am putting the card in the deck and whether the character has a benefit they are gaining this is worth the high resource cost of the card.