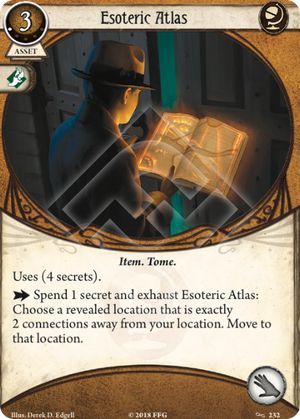 Tome's for her are so outright powerful that if they make tomes with triggers at all the book has to suck for everybody, only to be viable on her. An irksome thing.

This card is an outright terrible variant on Pathfinder, both cards can routinely get you 2 locations of move in one action, this one requires a revealed location, a slot, and has 4 uses. What??? WHY??? Also, Pathfinder moves you for totally free if you're moving just 1 location anyway.

This thing is easier to tutor, there being some tutors that target items and tomes specifically, but really. WHY??? Sure, Pathfinder is above curve, I'dd still be looking at it if it cost 2 XP, possibly 3, but I don't really think Pathfinder is OP enough to warrant that, just to incite excitement for this cruddy thing. Personally I'dd mutate Pathfinder to be 1 / Investigator but that's just me.

Edit: In case you're thinking this might get you past enemies.

In solo, the revelation requirement can be a hard-shutdown of this tactic, leaving you just as stuck and down 3 resources and this card that's not helping you at all. Besides, often when an enemy is barring your way, the Pathfinder trigger to engage it as a free action gives you 3 tries to evade it. In multiplayer if you're the sort of person who is avoiding enemies hard enough to consider this use of this card, there's probably a person who is chasing after them just as hard, I.E, them moving in to engage and kill the enemy leaves you free to move past and do your thing.

Tsuruki23 · 2233
You're forgetting one very important distinction. If you're going A->B->C, then Pathfinder will have you enter B whereas Esoteric Atlas will not. Plenty of locations will have penalties on entering, enemies that would engage you or maybe they flat out can't be entered. The Atlas gets you past all that. — TheNameWasTaken · 3 9/19/19
There’s also the matter of enemies. An engaged enemy locks down pathfinder, but Esoteric Atlas can be used to move two locations for only 1 AoO - which could be especially handy for Roland to move to a higher shroud location before killing an enemy. I do agree with TheNameWasTaken that they primary selling point of the atlas is the ability to skip locations, although the revealed limitation means it’s only good on backtracking, which makes it very scenario dependent in terms of value. — Death by Chocolate · 1137 9/19/19
While I agree, this is primarily useful in solo where a person might want to evade bad guys, but then in solo the chance that the location you want to go is'nt revealed yet.. Yeah. In multiplayer If youre the sort of guy who agressively avoids enemies, there's also a dude who agressively chases them, I.E no risk of engagement, your friend will already be there. — Tsuruki23 · 2233 9/26/19
There are a couple scenarios -- The Wages of Sin, the upcoming Point of No Return -- that start with all locations already revealed. This card, which costs a mere 1xp, might be a good snag for seekers in one of those. The Wages of Sin in particular tends to pile up with enemies, including a certain spectral someone... Leapfrogging these enemies as you dart back and forth trying to banish those heretics would be a beautiful thing indeed. — Mordenlordgrandison · 355 12/21/19
1

Esoteric Atlas takes a hand slot, so to be usable and worth an XP it must be good. It gives you 8 moves for 3 resources, a card, a play action and 4 moves actions (9 clicks), so you lose -1 net economy overall (not worth using only to get more moves). If you use Daisy Walker’s free action, the math changes to +3 net economy, which is quite good, but only if you didn’t need to use her power for a different time. The major benefit it offers is it allows you to skip locations, thus avoiding enemies that are present. If you just want to turn resources and a card into moves, Pathfinder and Shortcut are more reliable way to get free moves.

Overall, I think only Daisy is excited about this card. It helps to balance her poor combat. Given relatively limited options for tomes, she may want to take 1-2 of these as early upgrades.