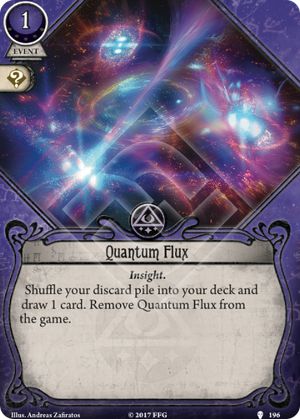 When you have this card in your hand, you have a choice. Either draw a card for zero resources or spend a resource to play Quantum Flux and basically draw a card. I'd rather have the resource and I'd definitely rather have filled this card slot with a card that did something worthwhile. The default cost of drawing through your deck is just a horror. Perhaps you're better off putting a card in that just heals horror, if that is a concern.

It is worth mentioning that there's an encounter card in Dunwich Legacy that this card perfectly counters. I wouldn't fault someone too much for playing Quantum Flux in the Dunwich campaign, but there are ways to counter that encounter card that aren't a waste of a card slot, like Ward of Protection or just finishing the scenario in a timely fashion or resigning when your deck gets low.

This card will also occasionally benefit you by updating the distribution of your deck as you shuffle in your good cards before you happen to draw your weaknesses, but this is offset by the times you have already drawn your weaknesses and Quantum Flux becomes a sub-par skill card.

fathermiles · 6
Disagree. The beauty of Quantum Flux is being able to recover core cards should you be forced to discard them. For example, one time I was playing Akachi, and I had to discard 2 Shrivelings and 2 Rites of Seekings. That's most of my power in my discard pile. With Quantum Flux, I have the chance to recover some of that power. It's a good 1 of card. — Soloclue · 2185 3/8/18
The problem with your argument is that you don't "get them back." They're shuffled into your deck and you still need to draw them. There are certainly rare occasions where you wanted this card, but you're better off playing more impactful cards. Like "CABS" theory from MtG, I really recommend players play cards that can in some way affect the game by allowing you to investigate better, deal with enemies better, or pass skill checks better. I'll also add card draw (more than one card) and card selection to that mix, because they help you find your impactful cards. Quantum Flux doesn't do any of those things. Half the time (almost literally), it's not advantageous to play it, whether it's too early to shuffle in any card or it would actually make your distribution about equivalent or worse because you've already drawn half or more of your weaknesses. The other half the time, it replaces itself and updates your deck distribution. Listen, I get that this looks like a card with only upside, but it's not doing enough to deserve a card slot. It shouldn't make the cut in any deck, even as a one-of. — fathermiles · 6 3/22/18
It seems like this would usually be a good one to include with Sefina, yes? — crymoricus · 228 1/11/19
Where this card becomes useful (other than in Dunwich) is when you have a deck where you are likely to find and play your best cards early, and have enough draw/dig that increasing the density of good cards in your deck is likely to make a difference. E.g. spell-heavy arcane initiate decks, where if you're running 2x Ward of Protection, 2x Counterspell, etc, you may well have dug most of the spells out of your deck by mid-game, and with Quantum flux, you can turn Arcane Initiate back into 'draw a useful card a turn'. — NatesPromNight · 586 2/14/19
4

This is an absolute must have card for pretty much every investigator that can take it.

Not having to worry about running out of cards during The Dunwich Legacy is wonderful (Can't say any more than that to avoid spoilers). Potentially getting good one use cards like Astral Travel/Storm of Spirits/Hypnotic Gaze/Blinding Light back into your hand "quickly" is super-powerful. Combine this with Arcane Initiate & Scrying, and you can fairly quickly get those cards back.

Panzerbjrn · 23
I am not trilled by it that much, as I do exhaust my player's deck only very rarely (even in Dunwich so far). Though, IMO it is good that it has "?" for ability tests which would be — XehutL · 46 12/23/17
..more frequent use of it anyway. — XehutL · 46 12/23/17
I dont see much use for this card yet, except for countering the one Encounter Card. The normal cost for running out of cards is just one tiny little horror. I guess, it could be usefull in a solo deck that uses lots of cards and Alyssa Graham, and you use Alyssa to doom your weaknesses to the bottom of your deck. — aramhorror · 568 12/24/17
I don't know if I agree that it should be in every investigator's deck, I like it a lot as a one-of in Sefina though. That said this card is a lot like Levy AR Lab Access from Netrunner, and that card is restricted now, I think this card isn't as good as LARLA though just because Arkham's card pool has less good stuff to recur, and you rarely use your entire deck in this game, on top of that, when you run out of cards you just take a horror & reshuffle your discard pile into a new deck anyways, so you don't need this card to refresh your deck except for in Dunwich maybe. — N146 · 41 12/29/17
You should rather add horror healing than this card. — Django · 3711 12/29/17
If you are running a lot of fast cards and strong events this card is really good. I like it a lot in Sefina and Norman as a 1 or 2 of. — Myriad · 1109 12/31/17
I'm thinking about taking that card in a Rex deck with heavy card draw since it can dilluate the draw of his curse. — alogos · 1 2/13/18
2

This card is very useful in a few cases:

The first is if you get rewards from searching your deck, like any research power. Mandy, Daisy, Minh, all of them benefit from putting astounding revelations back into their deck. Every time you use quantum flux, you’re giving yourself six resources later in the session. If you’re Luke, this is a great way to keep your gate box powered up by reupping enraptured.

Another is if you have a weakness or weaknesses that get shuffled back into your deck until your deck is very small. Sefina saves herself hit points and horror when she puts quantum flux in her deck.

The final case is anyone in Dunwich, which punishes you by trying to run out your deck.

Let look at the facts, Quantum flux replaces itself in your hand so it does not cost a card, so its true cost is 1 resources and 1 action (to play the card), given it is only an insight (outside of Joe) I don't think there's anything special you can do with that tag so you are probably always paying full price for this.

Would you use a location that had the effect "1 action, 1 resource>Heal 1 horror" and the answer is "sometimes!", sure its probably not worth doing but "sometimes!" it might be the difference between insanity and being king of the deep ones!. (I'm not sure what this game is about)

So Pro's can be listed to: Recharging a search heavy deck Diluting Weakness Avoiding Punishment for decking out 1 Beautiful point of horror prevented

I think this card is obscenely good in Dunwich and as a one of that just shuts down the main punishment mechanic its efficient at its job but not a card that should be instantly dismissed elsewhere, because a card with art that pretty needs to go into decks.... "sometimes!"