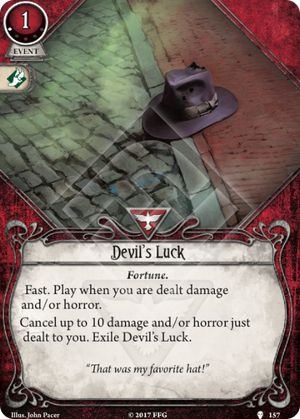 I haven't tried it yet, but if you were to take Parallel "Skids" O'Toole, with his tiny deck to The Dunwich Legacy, this card could be a good counter to Beyond the Veil, which could potentially be a significant issue for him. You could lose it to a discard treachery before you draw it, but even then, you might be able to get it into your hand by drawing an or playing Eucatastrophe. If you draw enough s or do some Double, Double + Scrounge for Supplies shenanigans, discarding cards from your deck might actually be a good thing.

The issue with this one is that it is exceedingly rare to be dealt around 10 damage and/or horror in a single instance (the poster child being Beyond the Veil).

jd9000 · 69
There are some final scenarios where a bad token pull or a card can deal 4-6 combined damage and horror in a single go. Even if you wouldn't be defeated, you probably don't want to take that. So, yes, this is a tiny bit more expensive (but 1 XP = 1 resource cost isn't unusual; see most of the talents, Proposterous Sketches)), but it is a more flexible card and, even if you don't get "full value," if it keeps you in the scenario, that's worth an XP. — LivefromBenefitSt · 937 10/14/20
I agree it's more a tech card than just goodstuff you can put into any deck (like lucky! for instance). it might also be significantly stronger when played in a deck built around Deja Vu. — PowLee · 13 10/14/20
Or in final scenarios, where you could not care less about Exiling, and where a lot of the 3 damage and 3 horror attacks might reasonably turn up. This is no Deny Existance (5), but it has a place. — LivefromBenefitSt · 937 10/14/20
It's worth noting that Devil's Luck costs one resource fewer to play and isn't conditional upon the damage or horror being able to defeat you like Perseverance is, which adds up to reasonable value for a 1 XP investment even if you only intend to use it to block hits that deal four damage and/or horror or fewer. This is probably the most relevant in Dark Horse decks, where reactive cards that cost one resource are a fair bit more wieldy than cards which cost two. This only really relevant in final scenarios, one-shot adventures, and Deja Vu decks, but worth bearing in mind all the same. — RichardUptonDeckman · 25 11/17/20