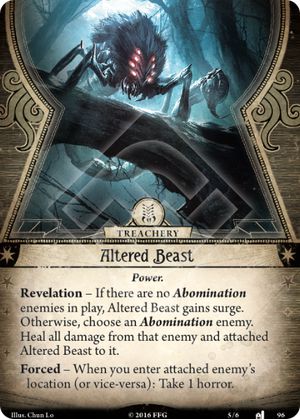 Does this card contain a typo? It isn't clear if you are supposed to attach this card to the abomination or not. We went ahead and attached it, assuming it was a typo.

SaraNoH92 · 2
for others benefit it says "attached" with a D, took me three reads to realise where the typo was. — Zerogrim · 203 3/24/21
I know, the English version is the relevant reference for everything, but still want to point out, the German version has not this kind of typo, and it reads the way, it's obviously suposed to be read in the original version as well. — Susumu · 156 3/24/21