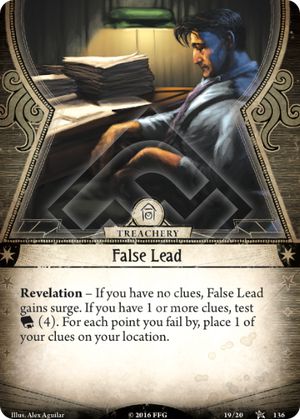 Quick tip: in many scenarios, you may be able to begin the test on this card, but spend your clues on something useful before suffering the effects of a failure. There are two player windows () after a skill test begins but before pulling a chaos token. Usually that's to activate an ability on something like Hyperawareness, but any ability with the symbol can legally be triggered during that window. Some scenarios let you spend clues as a to do scenario specific things (Midnight Masks, Bad Blood and The Vanishing of Elina Harper come to mind). And in most scenarios, spending clues to advance the act can be done during any player window as well (of the top of my head, can't remember if this applies to any scenarios with false lead, though..). If you know False Lead is in the deck, and you have enough clues to do some needful thing, it's good strategy to hold them through the mythos phase. That way, false lead loses surge, but still can't touch you, because you can spend those clues at the last moment! Also, if false lead is in the deck, Hunting Shadow probably is as well, and having clues at least increases your options on that card.

Mordenlordgrandison · 303
wow, nice tip, hadn't considered that before, this makes vanishing of elina harper so much safer. (midnight masks doesn't benefit from this however, unless there is a less obvious way to spend clues there) — Zerogrim · 171 1/28/21
You are right! Midnight masks required an action to spend clues for a cultist. I'm not aware of any way around that! — Mordenlordgrandison · 303 1/29/21
Great test to use Quick Study on. — SGPrometheus · 506 1/29/21
As I know, the act can be advenced during investigator phase only (without Objective); clue section in RR said "If there are no Objective ..., **during any investigator's turn** the investigators may, as a group spend...". However, I'm not sure about that because this restriction isn't given at Act Dect section. — elkeinkrad · 103 1/29/21
Works in Threads of Fate. Nice! — Zinjanthropus · 160 1/30/21
elkeinkrad is correct. Advancing the act by spending clues can be done during a free trigger window during any investigator's turn, unless an Objective is listed which stipulates otherwise. It could work if you drew it during your turn, due to Drawn to the Flame for example. — Yenreb · 9 2/2/21